Bathinda: The era of 1980-90s saw massive abuse of state-power by Indian armed forces in Punjab. Reports like Reduced to Ashes, Smoldering Embers, Punjab in Crisis and Protecting the Killers compiled by organisations like Coordination Committee for Disappeared Persons, Voices For Freedom, Human Rights Watch and Ensaaf reveal that organised, widespread and systematic use of custodial torture, extrajudicial killings, fake encounters, enforced disappearances and secret cremations had become common practises of Indian armed forces in the Punjab during this period. The abuses were followed by policy of impunity as the culprits were protected by the state and they were rewarded with promotions. The role of Indian judiciary is also under question in this regard as it failed to crack the impunity. Victim families were left with least or no recourse to justice. 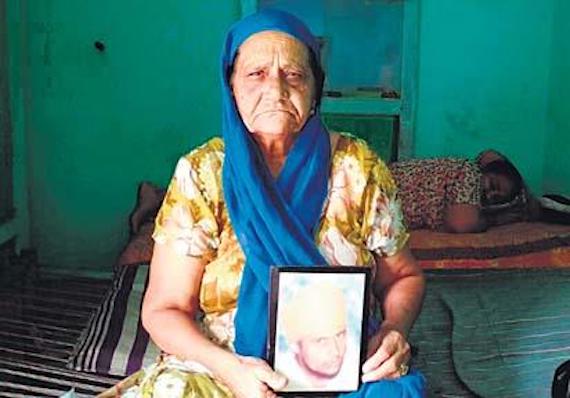 One such case made a headline in a Punjabi vernacular today (April 30). According to a detailed story reported by journalist Charanjit Bhullar in Punjabi Tribune (PT), the court record related to a case of a Sikh youth belonging to Bhikhi area has gone missing. The concerned youth was subjected to enforced disappearance by the state police 28 years ago after he was released from Bathinda jail. Notably, the court record comprised his own statement before that the court urging the judge to not to release him from the prison as he feared that he would be eliminated by the state police.

Jasbir Singh of Bhikhi was released from Bathinda jail on 19 March 1990 as quadi (prisoner) number 278 but his mother Shamsher Kaur (65) still waits for her son. Her eyes have stoned waiting for her son for past 28 years and now her only wish is to see those police personnel behind the bars, who had subjected her son to enforced disappearance.

Jasbir Singh was posted as Panchayat Secretary at Bhawanigarh. According to the police record two cases were registered against him – one at Phool police station on 12 October 1989 and other at Nathana police station on 12 February 1990. According the police records the then Phool SHO Anil Kumar picked up Jasbir Singh from Phool bus stand on 15 February 1990. He was arrested in both cases.

But according to Shamsher Kaur, her son was being kept in undisclosed and illegal custody by the police and his arrested was recorded only after a warrant officer of Punjab and Haryana High Court raided the police station to find whereabouts of Jasbir Singh. She says that it was only after the raid that her son was framed in false cases. Later on the petition of the family members of Jasbir Singh, the investigation of Jasbir Singh’s cases was handed over to Chandigarh (CID) SSP Umrao Singh Kang.

The investigation reportedly unearthed the falsehood of the police story as it revealed that Jasbir Singh was picked up by the police from his Bhikhi based residence on 6 February 1990 and he was tortured in custody and he was framed in false cases.

Jasbir Singh’s mother Shamsher Kaur has come to know that even the court record related to Jasbir Singh’s case, including his own statement before the court urging it to not to release him from jail as he feared threat to life form the police has gone missing. Disheartened Shamsher Kaur says that the police has ‘long hands’ as it first subjected her son to enforced disappearance and now it has disappeared the court records.

She is now staying with her daughter and making efforts to seek justice for her son. She has moved a petition in the High Court in this regard and next date for hearing is on July 13.