Srinagar: As per the media reports the Jammu & Kashmir chief minister Mehbooba Mufti was left deeply embarrassed after scores of women protesters here on Tuesday, while staging a walk out from a government function chanted ‘Azadi’ slogans. The protesting women alleged that they were tricked into attending the function.

While leaving the on going function mid way Mehbooba Mufti was hastily escorted out of the venue by her security after protesting women raised pro-freedom slogans before storming out of the event, reported  Deccan Herald. 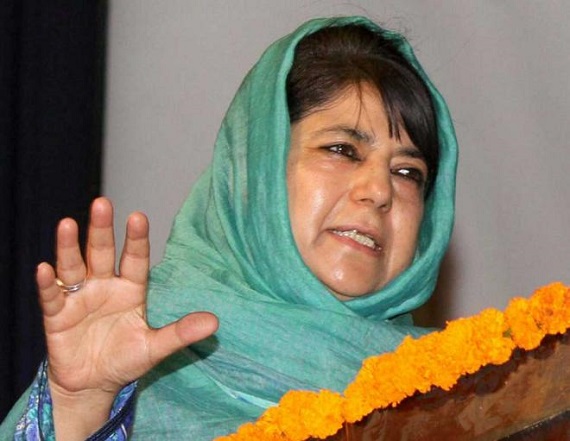 Media reports indicate that some women even flung chairs in the air, they said and added the chaos had begun early in the morning when some of the women – mostly from south Kashmir which has seen an upsurge in violence since July last year – raised pro-freedom slogans outside the SKICC the event was being held.

The security agencies had warned the organisers beforehand that trouble was brewing and that the Chief Minister should stay away. However, the organisers – J&K Rural Development Department – didn’t agree and insisted the function should go ahead as per the schedule, said media sources.

The Chief Minister was scheduled to interact with women’s self-help groups of the valley at the function organized as part of State Rural Livelihoods Mission named ‘Umeed’ scheme. The goal of the scheme is to either enhance their existing livelihoods or to create new livelihood so as to bring rural families out of poverty.

In a damage control mode, while addressing the media she stated  “Women were present in large numbers and probably a lady fainted. She didn’t get water and others panicked. Hope this programme is organized again because it is an important event.”