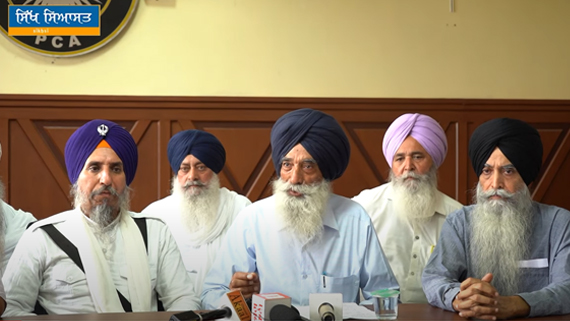 Vichar Sabha Lakhi Jangal Khalsa (Talwandi Sabo) organized a discussion on Words, speech and Human Nature on 15 Aug, 2022. This discussion was held at Gurdwara Sahib, Kamalu Swach. Speaking during this discussion Dr. Sewak Singh shared his views about How Dignity of Life Belongs of Dignity of Words?

Sikh Youth power of Punjab organized a discussion on the issue of Punjab river waters at Hoshiarpur on 3rd August 2019. Speaking during this discussion, Bhai Mandheer Singh discussed how Indian law and legal procedures were played with by the Indian state to loot the river water of Punjab.

Sikh Youth power of Punjab organized a discussion on the issue of Punjab river waters at Hoshiarpur on 3rd August 2019.

Sikh Youth power of Punjab organized a discussion on the issue of Punjab river waters at Hoshiarpur on 3rd August 2019.

Special Coverage of Zira Sanjha Morcha : People Are Determined For Closure of Distillery

People of Zira area are holding a peaceful protest demonstration outside the gate of the distillery owned by Melbros International Private Limited. Protesters maintain that the distillery is causing groundwater pollution. T

Vichar Sabha Lakhi Jangal Khalsa held a discussion at Sardoolgarh in Mansa district on 14th August 2022. Speaking duing this event Dr. Sewak Singh explained the importance of script and language for humans in general, and importance of Gurmukhi script and Punjabi language for Sikhs in particular.

People of Chamkaur Sahib have announced that they won’t allow this mill to be set up in their area as their area is eco-sensitive and any industrial activity will lead to pollution of ground water in this area. On 28 August 2022 a mass gathering was held at Gurdwara Bir Jand Sahib

Tradition is a way to protect Society, Philosophy, History and Way of Life: Dr. Tejwant Singh

during the book launch event, Advocate Jaspal Singh Manjhpur briefly shared his views about the book.

Speaking during this discussion Dr. Sewak Singh shared his views about things that we need to take care of while reciting Gurbani.

June 1984 Ghallughara: What Sikhs Can Learn From History for Future?

On 4 June 2022, a Gurmat Samagam was held at Bhawanigarh in the memory of Shaheeds of June 1984 Ghallughara.