Hoshiarpur:  Dal Khalsa and its alliance partner SAD (Panch Pardani) hits out at the Akali led Punjab government for failing to discharge its constitutional duty in arresting the guilty cops under murder charges who ordered the firing on Sikh protesters that resulted in killing of two Sikhs in Faridkot district. The organizations termed the reinstatement of Panj Pyara’s and removal of S S Saini from the post of DGP as a right but belated step. 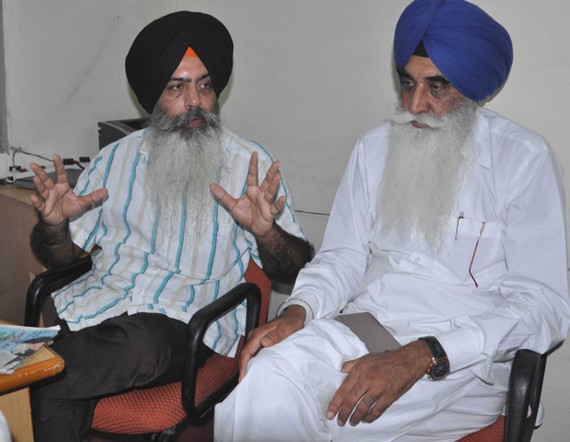 Talking with the media, Dal Khalsa spokesperson Kanwar Pal Singh and Harpal Singh Cheema of SAD (Panch Pardani) said the global Sikh community were very saddened and hurt by the several incidents of desecration of birs of Guru Granth Sahib in various villages of Punjab. The Punjab Government led by Parkash Singh Badal has totally failed to dig out the truth, expose hidden faces and real designs behind the acts of sacrilege. They said there was more to it than meets the eye.

They took a dig at the former DGP presumably under whose reins the police fired on silent protesters for his reported threatening advice to the Chief Minister and the Home Minister ‘not to arrest the cops guilty of killing the two Sikh protesters otherwise it could generate revolt in the police department’. “It’s purely unlawful and unethical advice that needs to be thrown into dustbin. Saini has attempted to become the “martyr” by portraying himself as saviour of accused cops and in the process, ironically, he has thrown all rules and norms of justice to wind”. They asked the new police chief to order the arrest of guilty cops in firing case and deliver justice.

They said the Shiromani Akali Dal and its extension counter- the SGPC have corrected their blunder by reinstating Panj Pyara’s. However, they were critical of the SGPC for maintaining criminal silence on the orders of five beloved ones to sack the five head priests.

The root cause of the present crisis was the faulty decision of Jathedar’s in pardoning the heretical cult head Gurmeet Ram Rahim. While under pressure from Khalsa Panth, the decision has been repealed, yet the Sikhs would not rest till the present lot of Jathedar’s were removed from their posts as they were responsible for defiling the sanctity and supremacy of the Akal Takhat at the behest of their political masters.

They demanded immediate dismissal of present lot and appointment of an interim Jathedar’s of Takhats in consultation with Panthic bodies till the Sikh Nation evolves strict procedure and guidelines for the appointment and removal of the Jathedar’s.