Badals may have added votes to Congress’ Bag: Media Report

Chandigarh: The state of Punjab recently witnessed a three sided cut throat state assembly election that concluded on 4th Feb 2017, the result of which shall be declared on 11th March 2017. All the contesting parties be it SAD Badal Dal-BJP, Congress or the AAP threw everything they had into canvassing and  persuasion of the general public of the state with the intention to garner their votes. Throughout its election campaign the Aam Aadmi Party has been maintaining that both the SAD Badal Dal-BJP and Congress party were jointly contesting the state assembly elections against AAP. AAP continuously maintained that their is a clandestine agreement between both the above said parties. 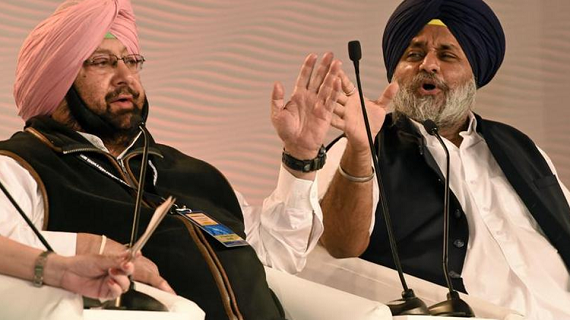 Now, it may be seen as knowingly or unknowingly the reports in the mainstream media are substantiating the allegation that were levelled by the Aam Adami Party in its election rallies through out the state.

On such report of Sukhdeep Kaur was published in the Hindustan Times (HT) which is apposite to the claims made by the AAP that both the ruling SAD Badal-BJP and opposition Congress reportedly assisted each others candidates in AAP strongholds.

The detailed report is being shared with the readers of Sikh Siyasat News (SSN) as follows:

FEARING AAP, AKALIS MAY HAVE ADDED VOTES TO CONGRESS KITTY

CHANDIGARH: There are no permanent friends or foes in politics. Behind the euphoria in Congress camp after polling ended on Saturday was also the perception that the ruling Shiromani Akali Dal (Badal)-BJP alliance could have added votes to its kitty.

The Congress, on its part, may have returned the favour in seats it was not hoping to win or where the stakes of ruling Badals were high such as the Lambi seat of chief minister Parkash Singh Badal, Jalalabad of his son and deputy CM Sukhbir Badal, and the Bathinda (Urban) seat from where CM’s estranged nephew Manpreet Badal contested, party sources revealed.

Regarding Bathinda (Urban), which falls in the Lok Sabha constituency of Union minister and Badal’s daughter-in-law Harsimrat Badal, the sources said both Sukhbir and Harsimrat would not like Manpreet to win this seat.

After polling ended, the mood in the ruling SAD and BJP war rooms was sombre. But even the newbie Aam Aadmi Party (AAP) too did not exude the confidence it did before the polling day. This has surprised political pundits as post-poll calculations of many are still favouring AAP as the main player, though short of the majority mark of 59 seats.

It was precisely this possibility of SAD(Badal)-Congress “truck” that Kejriwal was using as his poll plank. A victory in Punjab could catapult AAP to the national scene against the Congress and BJP in the 2019 parliamentary polls. The AAP has shown its poll prowess by stitching an organisational structure in no time and enticing restive voters by promising them nothing less than a revolution. To outweigh the AAP propaganda of a SAD(Badal)-Congress “nexus”, Punjab Congress chief Captain Amarinder Singh had thrown his hat in the ring of fivetime CM Badal’s den, Lambi, but did not leave his home turf Patiala either.

To win the war, the two traditional rivals may have even agreed to lose some prestige battles. A defeat from his citadel Lambi may not augur well for the CM nor for Sukhbir from Jalalabad. Congress insiders said the fate of family rebel Manpreet may too have changed in the last day calculations.

“Both the Congress and Badal Dal-BJP know it would not be business as usual if AAP takes Punjab. As the two ruled Punjab alternately, the businesses of both Congress and SAD-BJP leaders have flourished. The AAP has also threatened to reopen corruption cases given a quiet burial by both Badal and Amarinder against each other,” Ashutosh Kumar, professor of political science at Panjab University, says.