Lahore:  At least thirteen people, including two top cops, were killed and several others injured in an explosion on Monday when a suicide bomber blew himself up during a protest rally outside the Punjab Assembly building in eastern Pakistan, police officials reportedly said.

It is been reported by the media that Lahore Traffic Police chief capt (R) Ahmed Mobeen, Senior Superintendent Police Zahid Gondal and DSP Pervez Butt were killed in the blast. 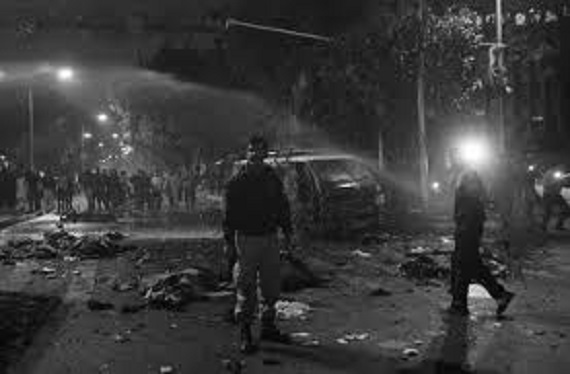 A policeman stands guard at the scene after a blast in Lahore. Photo Returers

Lahore police chief Amin Wains confirmed death of Mobeen. He, however, did not confirm about other casualties. “I can confirm the death of Mr Ahmed Mobeen at the moment,” he said while addressing the media persons.

While referring to the police sources it is widely believed that atleast 13 people  lost their lives when  a powerful explosion ripped through the protest rally in the  city of Lahore.

Addressing the media Punjab Health Minister Khawaja Salman Rafique said more than 60 people suffered injuries. The condition of some 11 injured is stated to be critical, the minister said.

DIG Mobeen had survived an attempt to his life during his posting in Balochistan.

A Lahore police officer told Times Of India (TOI) that apparently it was a suicide attack and the bomber targeted the police personnel present there. “The target was not the protest demonstration but the police officers,” he added.

The blast occurred minutes after Ahmead Mobeen arrived at the scene to negotiate with the chemists and pharmaceutical manufacturers who had been protesting outside the assembly. A TV footage shows that a motorcyclist dragging his bike close to police officers and blew himself up. Ahmead Mobeen is seen in the footage negotiating with the protesters.

While interacting with the media the Punjab Law Minister Rana Sanullah confirmed that it was suicide blast and ‘some police officers’ have been killed, He further added that the agencies had issued a threat alert that terrorists might target Punjab Assembly building and Governor’s House on the Mall Road.

“We have provided security to these venues. Had no demonstration taken place outside the PA building this incident might not have taken place,” he said in his statement.

Meanwhile, a spokesperson for Jamaat-ur-Ahrar, a faction of Tehreek-e-Taliban Pakistan claimed responsibility for the attack, notes TOI.