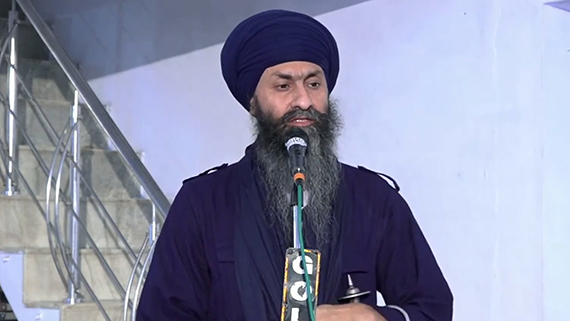 How To Keep Children Attached To Mother-Language?

On 28th February, Sikh Siyasat News remembers Bahujan activist Dina Bhana, as this day marks his birth anniversary. We are sharing a brief biography of Dina Bhana in audio podcast format. This podcast is based on a write-up penned by Inderpreet Singh Sangrur.

In this video Sikh Siyasat editor Parmjeet Singh Gazi analysis the "clip issue" and exposes the "clip politics" being played by these people, supposed to be supporters of the Aam Aadmi Party.

All About Prof. Davinderpal Singh Bhullar, His Case and the Issue of His Release

Professor Davinderpal Singh Bhullar is a Sikh political prisoner jailed in India since January 1996. He was earlier sentenced to death in 2000 and remained on death row for about 14 year as on 31 March 2014 his death sentence was concerted into imprisonment for life by Indian Supreme Court.

Past, Present & Future of Farmers Struggle in Punjab: Speech of Bhai Mandhir Singh at Shambu Morcha

New Agriculture Laws have trigger uprising in #FarmersProtest in #Punjab. #Farmers #Youth and other sections of society are out on streets. On 4 October 2020 #Shambhu #Morcha was announced as part of struggle against centralisation

S. Trivdivesh Singh Maini is Political Analyst at Jindal School of International Affairs. He is fields of interest include Role of Punjab in India and Pakistan Relations, Role of Nationalities in Foreign Policy, and India, Pakistan and China Triangle.

Speaking during an annual event organised by Guru Gobind Singh Study Circle (GGSC) at Kotkapura on 14th of December 2019, Bhai Mandhir Singh discussed different stages of public life of Sikhs as per Gurmat while elaborating the topic that "Why Sikhs Should Organise?".

Speaking during this event Advocate Rajinder Singh Bains recalled the contribution of Prof. SAR Geelani on the issue of political prisoners; and also spoke about Kashmir struggle and human rights issues.

Speaking during an event at Panjab University Chandigarh Prof. Pritam Singh (Oxford) discussed the topic of "Challenges For Punjab Economy in Global Context" in detail. This is video recording of the event.

Organisation and Leadership – Unity Versus Uniformity

Sikh political analyst and author Bhai Ajmer Singh was invited by Guru Gobind Singh Study circle to share his views during the organisation's annual camp at Kotkapura on 14 December, 2019. Addressing the delegates of GGSSC Bhai Ajmer Singh shared his views on topic "Organisation and Leadership - Unity Versus Uniformity".

Police Action Against Students of Muslim Universities: Sikh Youth of Punjab to Hold Demonstration at GNDU