Indian [forces] in Jammu and Kashmir is blinding Kashmiris unabated with each passing day. The pellet horror which started in the year 2016 is still continuing with no end in sight in near future. Small children, young and old and women have become the victims of this pellet horror. Hiba Nisar, 20 month old child, a resident of Shopian is a recent and youngest victim of this pellet horror, close to losing her eyesight of his right eye. India over the years has killed innocents and maimed thousands in Kashmir. 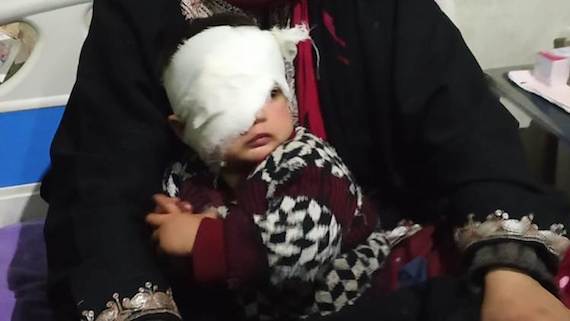 Hiba Nisar, 20 month old child, a resident of Shopian is a recent and youngest victim of this pellet horror

According to reports Hiba was playing inside his house when protests broke out outside her house and when her mother opened the window, the pellets fired from forces hit Hiba in her eyes. Human Rights Activists have sought report from the police about the incident and also demanded an independent investigation in the matter. But taking a look at the previous instances, there is little possibility that the probe in Hiba incident will be taken to its logical end. Fact of the matter is that forces in disputed Kashmir have trampled human rights under its feet on thousands of occasions without caring for any accountability. Killing and blinding of innocents have become a new norm here.

Unfortunate part of the story is that world bodies and super powers have not taken any substantial interest in Kashmir Issue and rarely reprimanded India over its worst human rights record in Kashmir. Its high time that World Human Rights Organizations take cognizance of the matter and play a role in stopping these human rights violation and blinding and killings in Indian Administered Kashmir . Indian cannot claim to be the largest democracy on planet while blinding and killing innocents in Kashmir.