Chandigarh: Yesterday on 24th July Prof Raj Kumar, former dean and head of the Institute of Management Studies at Banaras Hindu University (BHU), took over the charge as New vice chancellor at Punjab University Chandigarh. Prof Kumar is also well known for his association with the Rashtriya Swayamsevak Sangh (RSS).

According to the PU Act, the VC will hold office for a term of three years. Prof Kumar is the first V-C who does not belong to this university as all the previous Vice-Chancellors had either been students or teachers at PU(originated 1882). 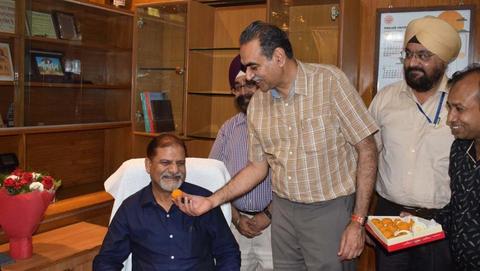 Nine candidates were interviewed to replace the outgoing VC Arun Grover. Several student bodies like Students For Society (SFS), Students Organisation Of India(student wing of Shromani Akali Dal Badal), National Student Union Of India (NSUI) protested against the V-C. They alleged that his selection has been made on the basis of his connections with the BJP and the RSS

In a Protest at Student Centre SFS leaders said ,”They are protesting against the new V-C because he will promote saffron culture in the educational system as per the agenda of RSS”,.

NSUI Chandigarh President Gurjot Singh Sandhu said ,“Our demand is simple. That is the procedure adopted for the appointment of Vice Chancellor should be made public. His name was not among the 10 shortlisted candidates chosen by the Selection Committee. A Sanghi VC has been appointed Vice Chancellor of the University”,.