Ropar, Punjab (July 10): The residents of Behrampur Zamindara village, who were protesting against the administration in relation to a road accident near Ropar, lifted their dharna this evening after the police announced that a three-member special investigation team (SIT) would look into the case.

Varinder Paul Singh, Senior Superintendent of Police, Ropar, announced it at 6 pm at the protest site near Solakhian toll plaza following which the protesters lifted the dharna and the body of Swaran Singh was shifted to the local Civil Hospital for a post-mortem examination. 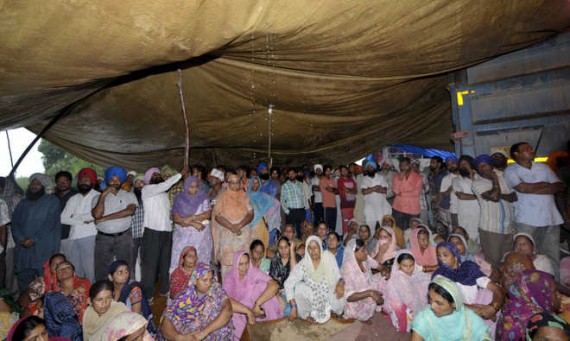 A view of Dharna that was lifted on Friday night

The police claims that experts from the state forensic laboratory have already submitted their report stating that the scooter was hit by the car.

The police are now waiting for a report of the central forensic laboratory whose experts examined the spot and vehicles yesterday.

Media reports say that the victim’s family was assured of a compensation of over Rs20 lakh and a job to a family member following which the protesters agreed to lift their 36-hour blockade.

The protesters had demanded that the owners of bus along with the bus driver be booked under Section 304A of the IPC. They also demanded Rs. 50 lakh compensation and pension for the victim’s wife and a job for a family member.