Amritsar, Punjab: The Shiromani Gurdwara Prabhandak Committee (SGPC) held interviews for the post of Chief Secretary amidst protests. As many as seven candidates appeared in the interview but their names were not made public by SGPC. 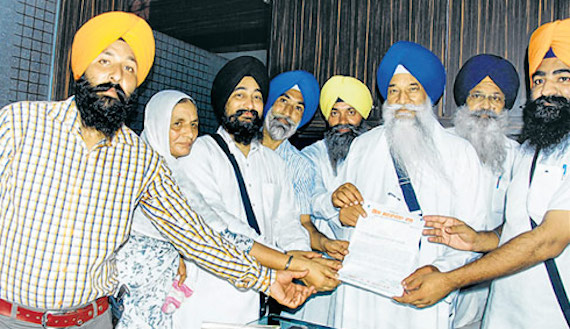 Notably, members of Sikh Sadhbhawana Dal held a protest against appointment of chief secretary in SGPC. The protesters were led by Ragi Bhai Baldev Singh Wadala.

The protesters also presented a memorandum to the Akal Takht Jathedar seeking his intervention to stop SGPC from heading with such appointment. They alleged that the post of Chief Secretary was deliberately created under political pressure from Punjab’s ruling party SAD (Badal).

“There is no provision for this appointment in the Gurdwara Act. There is no need for someone to get paid Rs. 3 Lakh a month when the SGPC is already doing well. It is a wastage of the money of devotees” said Bhai Baldev Singh Wadala.

A Times of India (TOI) report notes that [u]nder directions from the government, SGPC had already made its mind to appoint former general manager, Punjab and Sind Bank, Harcharan Singh for the coveted post, sources said. However, the responsibilities and area of jurisdiction of the post was yet not clear to the SGPC functionaries.

The final announcement for the name of chief secretary with a salary package was likely to be made during executive committee meeting of SGPC scheduled for August 25.