Take Action to give a push for Hate Crime Charges in Chicago Assault: Sikh Coalition

Chicago, IL: On the evening of September 8th, Inderjit Singh Mukker, a Sikh American resident in the Darien suburb of Chicago, was viciously assaulted after the assailant pulled up to his car yelling racial slurs, including, “Terrorist, go back to your country, Bin Laden!”

Despite clear hate crime evidence and indications by the Darien Police Department throughout the week that the assailant was going to be charged with a hate crime, the DuPage County State’s Attorney’s Office announced yesterday that no hate crime charges will be brought against the offender.

The Sikh Coalition, a US based civil rights and advocacy group, has called upon people to demand hate crime charges against the assailant of Interjit Singh. 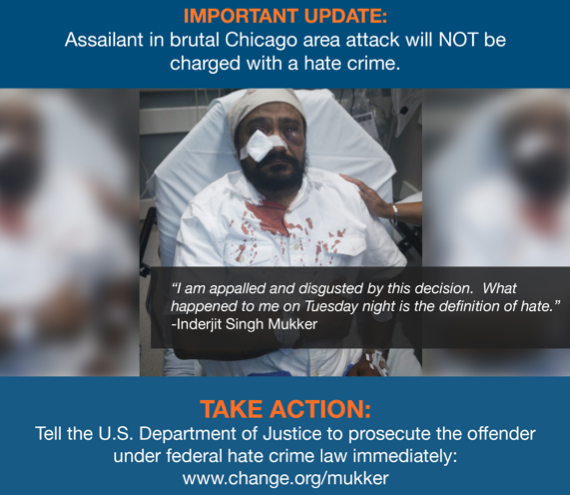 A community alert issued by the Sikh Coalition reads: “Inderjit Singh could have been your brother, father or son. Whether a hate crime happens in Chicago, Elk Grove, New York or Oak Creek, we understand as a community that it affects all of us. That’s why we must demand together that the U.S. Department of Justice bring federal hate crime charges against the assailant immediately”.

“In just 12 hours, concerned community members like yourself have already signed more than 2600 signatures on a new petition demanding federal action. However, we need thousands more. Will you join Mr. Mukker and his family in this fight – SIGN NOW!“, the alert issued in form of a newsletter reads further.

“You cannot address the problem of hate in this nation if you refuse to acknowledge its existence,” said the Sikh Coalition’s Legal Director, Harsimran Kaur. “This was not a simple case of road rage. In fact, in the Sikh Coalition’s many years of representing hate crime victims, the bias motivation is as clear and as obvious as it gets. To ignore the racial element of the crime sends a clear message that Illinois State’s Attorney, Robert Berlin, is not interested in protecting vulnerable communities.”

WHAT YOU CAN DO:

Over the last 72 hours, we have received hundreds of messages of support and questions of what more can be done. Now is your chance to make a difference for Mr. Mukker and his family.

Sign the Petition – Baljot and Kanwar, Mr. Mukker’s children, are calling upon the community to seek justice on behalf of their father. Join them in demanding that the U.S. Department of Justice bring federal hate crime charges against their father’s assailant: www.change.org/mukker – SIGN NOW!

To learn more about the Sikh Coalition’s most recent public response, click here.

To learn more about why it is so important for hate crime laws to be used, check out Harpreet Singh Saini’s recent Op-Ed in the New York Times.