Chandigarh: Punjabi film ‘The Mastermind Jinda Sukha’, which was set to be released on September 11, has reportedly  been banned in India.

The film is said to be based on lives legendary martyrs of Sikh freedom movement Bhai Harjinder Singh Jinda and Bhai Sukhdev Singh Sukha, who had assassinated of former Army General Arun Kumar Vaidya. It was previously granted clearance from the Censor Board on July 24, but has now been banned after the union home ministry and intelligence bureau (IB) raised objections. 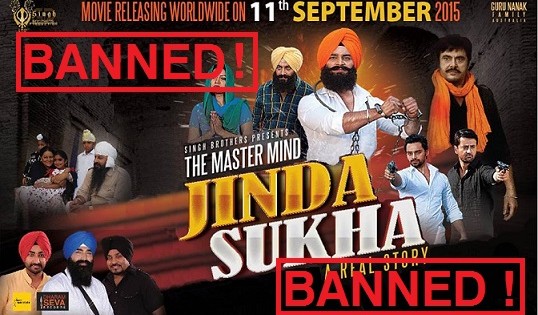 Director of the movie, Sukhjinder Singh Shera told Sikh Siyasat News (SSN): [T]he advisory committee of the Censor Board called us on Tuesday for a meeting in Mumbai. They told us they had received a letter from the home ministry and IB raising objections to the release of the film.

“They felt the movie would hurt the religious sentiments of people leading to violent situation. As a precautionary measure the board decided to ban our film” he added.