Under fire from the Sikh sangat, Jathedar announces committee to advice on dera Sauda pardon issue

Amritsar: In wake of widespread rejection of their move to grant pardon to controversial dera chief Gurmeet Ram Rahim for his 2007 blasphemus act, Akal Takhat Jathedar Giani Gurbachan Singh has announced to form a committee to take suggestions from Sikh organizations and “advise” jathedars on the issue of pardon to Dera Sirsa head.

Giani Gurbachan Singh on Sept. 29 released a “press note” under his own signatures on the letter head of the Akal Takhat Sahib, in which he said that a committee comprising Sikh scholars would be formed to extend its advise on the issue of pardon to Gurmeet Ram Rahim.

In this release Giani Gurbachan Singh once again maintained that the decision to accept clarification sent by Gurmeet Ram Rahim and grant him pardon was taken in lines with the “interests of the communal harmony”.

He said that the Sikh organizations, personalities and the Sikh sangat should send their “suggestions” to the committee. Notably no announcement has been made about members of such committee. 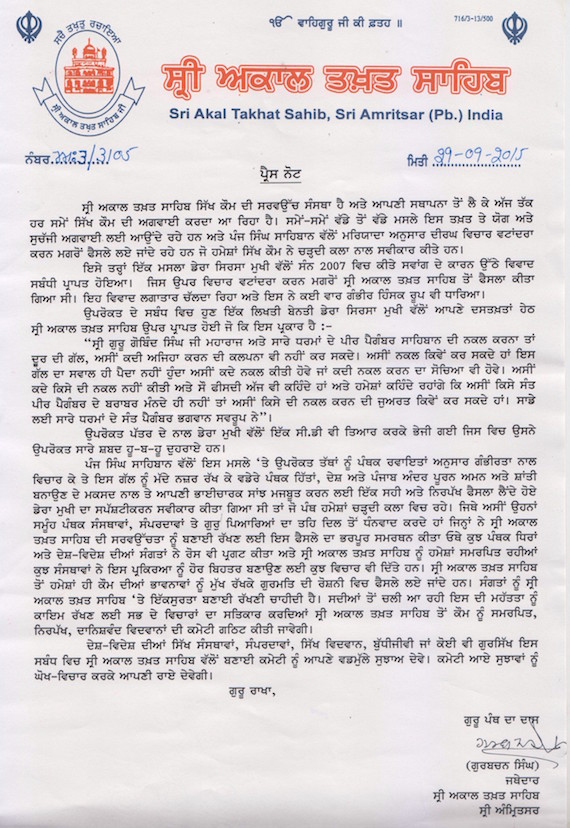