Washington DC: The members of United states congress and international legal and human rights experts have urged India to uphold the right of peaceful protest and engage with protesting farmers productively following the norms of democracy.

Speaking at a webinar jointly organised by American Sikh Caucus Committee and United Sikhs on International Human Rights Day the co-chair of American Sikh congressional caucus Congressman John Garamendi stated, “As Co-Chair of the American Sikh Caucus in Congress, my office has received first hand accounts of the horrific crackdowns on protestors who are trying to peacefully express their disapproval of India’s recent agricultural reform legislation. There is no excuse for brutally suppressing the voices of these protestors, and I implore the Indian government to cease its violent actions against its citizens and honor their peaceful assembly.” Congressman T J Cox stated that the issue of protesting farmers has received due attention and support from the US Congress. He urged India to uphold the civil liberties and ensure the safety of the protesting farmers. He said all Americans stand in solidarity with the Punjabi farmers. 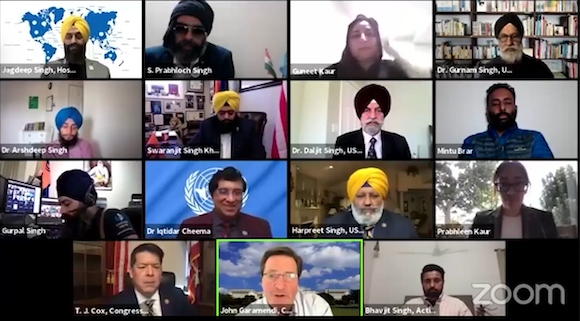 A view of the Zoom conference

International human rights expert and Member of UN global Steering committee Dr Iqtidar Cheema said that Freedom of peaceful assembly is endorsed by article 20 of UN Universal Declaration of Human Rights, Article 21 of UN international Covenant on Civil and Political Rights and article 5 of UN Declaration on Human Rights Defenders. He said that regrettably instead of taking appropriate measures to address the concerns of the protesting farmers; Government of India decided to use the state-led repression against the peaceful protestors. Police has used brutal force against the peaceful protesters and water cannon which are against the covenants of the UN.