Why SGPC is Silent on Distortion of Sikh History by RSS?: Bhagwant Mann

Chandigarh: Aam Aadmi Party (AAP) MP from Sangrur has questioned the Shiromani Gurdwara Prabhandak Committee (SGPC) for its silence over distortion of Sikh history by the Hinduva fountainhead Rashtrya Swayamsewak Sangh (RSS). Taking to media persons Bhagwant Mann said that why SGPC was not speaking out against distortion of history by the RSS? 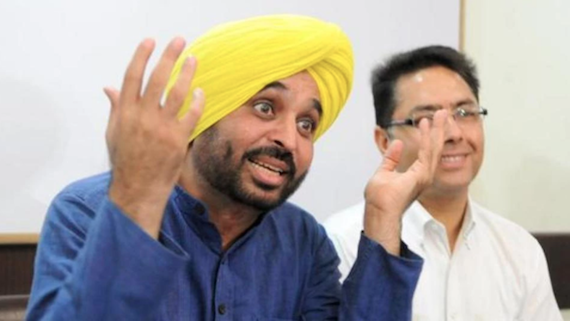 Pointing out the Shiromani Akali Dal (Badal)’s political alliance with RSS’s political wing Bhartiya Janta Party, Bhagwant Mann said that RSS is safforanising the entire history of the people of this region, including the Sikhs but the SGPC won’t speak up against it as its political masters have alliance with the RSS and BJP.

It is notable that the SGPC is raising objections against distortion of Sikh history in a class 12 text book prepared by the Punjab School Education Board.

Meanwhile, the SGPC today announced to withdraw the services of Dr. Kirpal Singh Historian from the project of editing of sources related to the Sikh history. Notably, Dr. Kirpal Singh was appointed as head of a committee by the Punjab government to write the class 12 history book and he had defended the Punjab government after the SAD (B) objected against the revised edition of the history text book. [ ⊕ READ IN DETAIL on Sikh Siyasat News (in Punjabi) ~ ਸ਼੍ਰੋ.ਗੁ.ਪ੍ਰ.ਕ. ਨੇ ਡਾ. ਕਿਰਪਾਲ ਸਿੰਘ ਕੋਲੋਂ ਸਿੱਖ ਇਤਿਹਾਸਕ ਸਰੋਤਾਂ ਦਾ ਸੰਪਾਦਨਾ ਕਾਰਜ ਵਾਪਸ ਲਿਆ ]