Lucknow: The Uttar Pradesh Madrasa Board has reportedly started preparing to introduce books approved by India’s National Council of Educational Research and Training (NCERT) in Islamic religious schools called Madrasa on the pretext to standardise and improve the curriculum in sync with job requirements.

The move comes close on the heels of the state government directing all madrasas in the state to register with the UP state madrasa board. 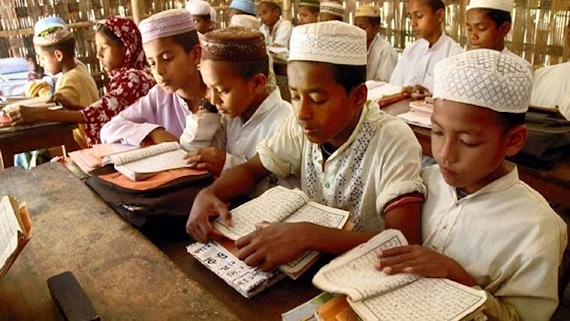 The move has been seen as an attempt by the ruling ‘pro-hindutva’ elite of both at the state and the Central government to mold and manufacture those cultural differences which cannot be directly assimilated as per Indian (Hindu) nationalism and inculcate the concept of Bharat mata in them.

“We are in the process of standardising and integrating the syllabus, especially for subjects like science, mathematics and English. We plan to introduce NCERT books,” registrar of UP Madrasa Shiksha Parishad, Rahul Gupta said while interacting with the media.

It is worth mention her that considerable number of madrasas are already teaching and made arrangements in the past so that Muslim students can have access to more modern subjects like Mathematics and English.

So far students, after completing their education from a madrasa used to become alims or maulvis which are low paying jobs.

“In the religious part only bifurcation of books will be done. Like what will be taught to class 1 student and what in class 5. Our soul aim is to introduce NCERT books for subjects like mathematics and science,” registrar Rahul Singh adds.

While supporting the Indian state’s intended program to introduce its version of education in the madrasas Eidgah imam Khalid Rasheed Firangi Mahli who runs one of the oldest madrasas in Lucknow adjacent to Aishbah Eidgah reportedly said there is nothing wrong in introducing NCERT books.

“But we would have appreciated had madrasa officials were taken into confidence before going ahead with it. We are not against modern education. In fact many of the private madrasas were teaching these subjects,” he further adds to his statement.

Earlier in August, the state government issued order for madrasas in Uttar Pradesh to compulsorily observe the Independence Day, a move criticised for “raising doubts on the integrity of those running madrasas and its students”, reports Hindustan Times (HT).