The letter, which you can see in full in both English and Punjabi, has been sent out as thousands (possibly millions) of Sikhs are currently leading protests against the Indian government regarding farmers’ rights. The protest has seen a national revolt against new laws implemented which are seen as opening up India’s farmers to potential exploitation by corporations. 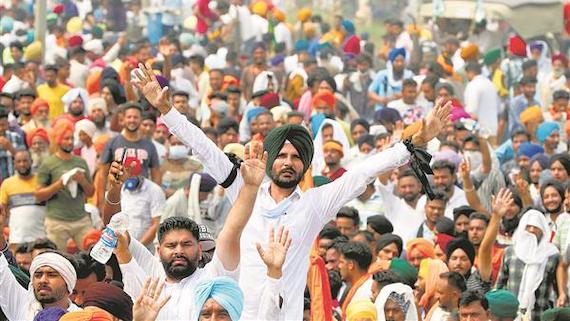 Signed Guru Panth De Daas (Servants of the Guru-path), the letter addresses all Sikhs and highlights that “naujawan (Sikh youngsters) in the collective form of sangat (Sikh congregation) have taken the reins and shown a glimpse of the power bestowed upon the Khalsa directly by Akaal Purakh (The Eternal Being, referring to God)”.

Read the letter in full, including details of all signee organisations, below:-

Watching the images of the Kisaan Morcha over the past few days has sent a resounding message and reminder to Panthic naujawan around the world: political power and strength has always ultimately laid in the hands of the sangat. The only question has been when will we decide to break from our doubts and self-imposed restrictions to wield it?

In this moment we have seen naujawan on the ground in Punjab reject traditional forms of leadership and state power. Rather than submit to the ego-driven agendas of a few dogmatic leaders or passively seek justice from the state, naujawan in the collective form of sangat have taken the reins and shown a glimpse of the power bestowed upon the Khalsa directly by Akaal Purakh. The entire machinery of the state has literally been placed as an obstacle on their road to Delhi, from concrete barricades, trenches, water cannons, and police lathi charges–but each obstacle has been overcome with sheer determination and collective strength.

Rather than restricting itself within a centralized bureaucratic structure, the potential of the Morcha was unleashed when power was diffused throughout the sangat. As a result, no leader will be able betray the demands of this movement, no state mechanism will be able to co-opt the patient rage of Punjab, and no discussion, commission, or other delaying tactic will be able to lull the sangat into a passive state. While we engage every means available to us in this struggle, it is important that we never rely or depend on any of these to the point of a handicap. The ultimate decision-making power is the sangat and our only limitations or parameters are the sidhant (principles) of Guru Granth-Panth.

As we all know, this issue is not just about economics or farmers. Although Delhi’s attempts to sell Punjab’s jameen–and that of other regions–to multinational corporations is the immediate flashpoint of this resistance, there is a much deeper context. This is about a fascist government heading an Indian state that has been working to culturally assimilate the subcontinent and politically centralize power in Delhi with the encouragement or tacit complicity of “Western powers.” This latest economic policy is tied in with a larger project to create a homogenized and subdued population helplessly subject to the whims of a xenophobic Hindu nationalism and global capitalism. The trajectory of this process can easily be seen in several initiatives over the past years: demonetization, imposition of GST, abrogation of Article 370 in Kashmir, “reconstruction” of the Ram Mandir, the citizenship amendment laws and countless others.

As articulated by countless naujawan on the ground, this is not just a matter of economic policy or the bills in isolation. Indian liberals and ignorant observers are currently tripping over themselves to declare the Kisaan Morcha as a purely “secular” movement confined solely to the three laws and Hindutva supporters are scrambling to vilify the protests as led by “militant secessionists.” Despite the difference, both have a similar interest. While the liberals are desperately seeking to ignore the full context and distort reality to fit their ideological commitment to Indian nationalism of a Nehruvian brand, the latter are seeking to preemptively legitimize and justify a violent crackdown which could lead to mass arrests and widespread violence. The reality however, is missed by both.

The spirit of the mobilization seen in recent days is the rage of Panth-Punjab’s soul against Delhi; a rage that has been building in the face of decades of violent repression and imperialist policies rooted in assimilation and genocide. This is why there is a qualitative difference between the response in Punjab and other affected regions today. This is a rage that has shown renewed sparks in the past decade but has always been quickly put out. Multiple attempts were made to channel these ongoing frustrations, but they were contained by compromised leadership, misguided tactics, and selective state repression. This rage has once again broken through layers of manufactured complacency, coercive state control, and the restrictive frames of electoral politics. History will mark this moment as a key flashpoint on the path to break Delhi’s stranglehold over Punjab and the entire subcontinent once and for all.

This Morcha is centred around a fundamental question of annkh (dignity), justice, and the right of Punjab to determine its own agricultural policy and tend to its own economic, social, and environmental needs. And while the Guru Khalsa Panth and the life-world of Punjab as a whole remain conceptually distinct, the way our lands and bodies have bled into each other over centuries have intricately woven our destinies together.

The Khalsa’s sangarsh throughout the centuries has never been a sectarian movement predicated on a chauvinistic impulse of identity or self-interest. Every struggle has been an exercise of the patshahi bestowed upon the Khalsa to destroy the tyrants and protect the poor, and establish a just polity based on sanjhivalta for all of Punjab and beyond. This wave–put into motion by the kurbani of our ancestors, from the Khalsa Raj established by Baba Banda Singh to the Dharam Yudh Morcha and Sikh jujharoo lehar for Khalistan, has consistently fought to uproot every form of oppression for sarbat da bhala and resist any attempts to restrict the Khalsa’s inherent sovereignty. Today is no different.

Naujawan of the Guru Khalsa Panth have been the driving force of history in every era we celebrate and that responsibility remains on our shoulders today. It is up to us to ensure that those seeking to manipulate this jazba for their selfish electoral gains, or those who attempt to sell the Morcha short are stopped at any cost. Most importantly however, we must shift the terrain from a politics of grievance seeking solutions solely from state institutions, towards an internal transformation aimed at cultivating our collective power through our own sovereign institutions. We cannot rely solely on the limitations of our finite intellect, but need to connect with Naam-Bani to become vessels of the Guru’s hukam. Justice and political power emanate from Guru Granth-Panth only–they will not and cannot be granted to us by our oppressors.

This is the road to the patshahi promised to the Khalsa by Guru Sahib.

This Morcha is only the first step in a long struggle to come and our fateh will depend on the bold leadership of those naujawan committed solely to these values of Guru Granth-Panth.