Aam Aadmi Party has fielded Jaswinder Singh Jahangir (38) from Attari (SC). He is vice president of ETT Teacher Union, Punjab. As per AAP Jaswinder Singh Jahangir Actively participated and agitated for the concerns of farmer’s, labourers, employees & unemployed youth and he was sent to jail along with wife while protesting against Pb Govt for teacher’s rights. 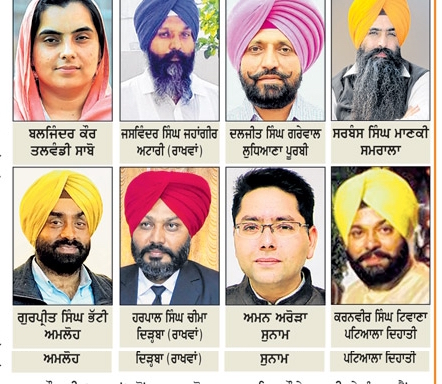 Harpal Singh Cheema is given party ticket from Dirba (SC). Cheema, 43, is ex-president of Bar Association of Sangrur and he is Zonal Head of AAP legal Cell (Sangrur).

AAP has fielded Karanvir Singh Tiwana (40) from Patiala (Rural). A metric pass ex-sarpanch of Village Chhanna Nathu wala, Tiwana is ex-president of Village Youth Club and a social worker. As per AAP he actively participated in Anna Hazare’s agitation. He is senior vice president of Kissan wing of AAP.

Baldev Singh Azad, a teacher for past 34 years is fielded from Malout (SC). As per AAP Azad has authored 4 books and he is a literary critic.

Prof. Baljinder Kaur, 30, is fielded form Talwandi Sabo. She is president of women wing of Aam Aadmi Party. According to AAP she is a social worker. She has been previously candidate of AAP in Talwandi Sabo by-polls.

Anu Randhawa, 35, shall contest Ghanaur seat on AAP ticket. A post graduate in Public Administration, Any is said to be a social worker, who organises marriages of poor persons and organises blood donation camps.

Master Baldev Singh, 58, a JBT Teaching since 31 years, is AAP candidate from Jaiton (SC). He is a social worker and former president of teacher union, Faridkot.

Gurpreet Singh Bhatti, 42, has got AAP ticket from Amloh. He was in People’s Party of Punjab (PPP) formed by ex-SAD (Badal) leader Manpreet Badal.

Sarabans Singh Manki, 46, a former member of the SGPC is fielded form Samrala. As per AAP, he is a small farmer and a social worker.

Aman Arora, 42, is fielded from Sunam. As per AAP he is social worker since 25 years. He had been president of trust working in the filed of health and education in his area.