Gurgaon: As per media reports the victims of the 1984 Sikh genocidal massacre in Gurgaon have blamed the BJP-led Haryana government for failing to give them justice.

The incumbent government, they alleged, has even failed to act on the recommendations of the Justice (retd) TP Garg Commission, constituted to look into the incidents of violence in the Pataudi and Gurgaon districts that submitted its report on April 29, notes a report in Hindustan Times (HT).

“I have been waiting for 32 years with a hope that justice would be served one day. Unfortunately, the day has not come yet. We don’t know why the present government is not implementing and making public the recommendations made by the one-member Justice (retd) TP Garg commission,” HT quotes eighty-one year old Santokh Singh Sawhney, president of an Action Committee that organised a meeting for raising the issue at the gurudwara on Sunday. 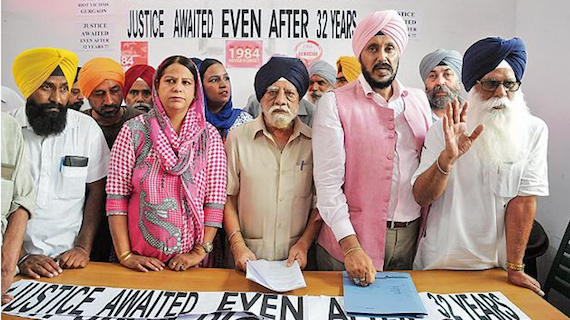 “There are around 10,000 Sikh families in Gurgaon who have been directly or indirectly affected by the 1984 Sikh genocide. Not only lives but businesses and houses were lost,” said JP Singh Sahni, the vice-present of the committee.

The victims have once again written to chief minister Manohar Lal Khattar seeking his intervention in the matter so that the Garg Commission recommendations are implemented.

“The government must wake up and serve justice to the victims of the 1984 genocide,” said Daya Singh, president All India Peace Mission.