AMRITSAR: Ever since preparations of celebrations of Guru Nanak ji’s 550th Parkash Gurpurb have started, the Shiromani Akali Dal (Badal)’s honchos – the Badal family, seem promoting themselves in the name of celebrations and ignoring the Shiromani Gurdwara Parbandhak Committee (SGPC) which is making all the arrangements for organising all the events to mark the historic and auspicious occasion. 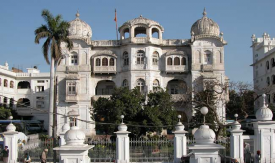 Fresh instance is the acceptance of  Ram Nath Kovind, President of India, for invitation given by the SGPC for the main function to be organised by it at Sultanpur Lodhi on November 12, 2019. Union Minister for Food Processing Harsimrat Kaur Badal was first to give this information on twitter but did not mention anywhere in her tweet that the SGPC is organising this function, though she shared the photograph in which SGPC president Gobind Singh Longowal is seen handing over the invitation.

Her husband and SAD (B) president Sukhbir Singh Badal also followed her by retweeting her post. Indirectly, they took credit of the celebrations by ignoring the SGPC though it is also under their control. The SGPC which is run with ‘bheta’ (offering) of sangat in historic gurdwaras managed by it, issued press release in this regard hours after Badals’ tweets. However, the SGPC highlights Badals in the release.

The political observers view that they see it as an opportunity for them to revive their party which is beleaguering especially after Sri Guru Granth Sahib Jee’s beadbi at Bargari and Behbal Kalan killing.

I am gladdened and gratified at President of India Sh Ram Nath Kovind Ji’s acceptance of our invitation for celebrations of the #550thParkashPurab at Sultanpur Lodhi on November 12. I express my gratitude to him for respecting the #Sikh ideals and ethos.@rashtrapatibhvn https://t.co/MXkKJ7cdwI

This is what opposed by Punjab Cabinet Minister for Jails and Cooperation Sukhjinder Singh Randhawa. He alleged that the SGPC is working in hands of the SAD (B) leaders by writing letter to Sri Akal Takht Sahib acting Jathedar Giani Harpreet Singh.

Basically, he questioned Badals’ accompanying the SGPC office-bearers including president Gobind Singh Longowal when latter went to invite Kovind and Prime Minister of India Narendra Modi. After giving the invites, SAD (B) had issued separate press note in this regard, of which there was no need when the invites were by the SGPC.

Prior to this, Harsimrat Kaur Badal had said that the historical town Sultanpur Lodhi be painted white on the occasion of 550th birth anniversary of Guru Nanak Jee. However, she did not name the SGPC which is supposed to implement this plan. “This is clear example of using SGPC or guru ki golak for personal and political interests”, said another observer.