On the occasion, Sanjay Singh said that AAP and Bains Brothers’ Lok Insaaf Party have a “common target to throw Congress and Badals out of state and liberate it from corrupt parties”. He claimed that together both parties will write a new chapter in the history of Punjab. 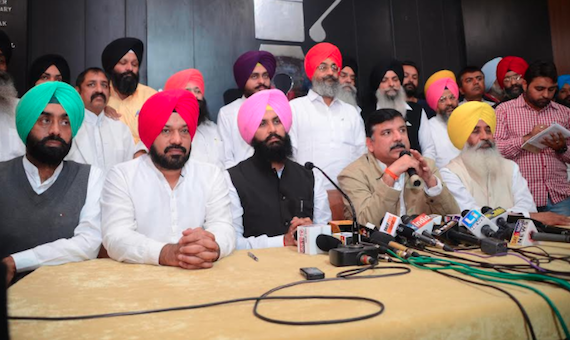 AAP’s central leader said that Bains brothers are fighting against land, sand and drug mafia in Punjab for long time and raised voice against the beadbi of Sri Guru Granth Sahib. He said that everyone who is concerned about Punjab must join hands to form a government of their own. Singh criticized Captain Amrinder Singh for inducting tainted leaders of other parties in Congress just to get Chief Minister Post.

Simarjit Bains said that politics is no business for him and he doesn’t use it to mint money but a sacred mission of patriotism. Bains said that now that both the parties are together and people are with then it is sure that foundation of a new Punjab will be set.

Bains alleged Captain Amrinder of being Carbon copy of Badals in looting Punjab and said that nothing good can be expected from Congress.

Bains said that during the rule of so called Panthic Government, Punjab has witnessed desecration of Sri Guru Granth Sahib and innocent Sikhs were tortured by the government. He said that the gurdwaras of Punjab will also be liberated from corrupt Badals and SGPC after forming government in Punjab. He said that the alliance between AAP and Lok Insaaf Party is not only for the upcoming elections but for writing a new chapter in the history of Punjab. He promised to unite workers who were annoyed for some reasons in the past.

AAP’s state convenor Gurpreet Singh Ghuggi said that it is a matter of joy and relief for Punjabis that both the parties which are concerned about the people of state have decided to join hands.