New Delhi: The Aam Aadmi Party on Tuesday “demonstrated” the tempering of Electronic Voting Machines in Delhi assembly during a special session of assembly.

Aam Aadmi Party MLA Saurabh Bhardwaj, who is an engineering graduate in computer science claimed anyone who knew a “secret code” could tamper with it. He claimed the code was programmed into the machine during election. 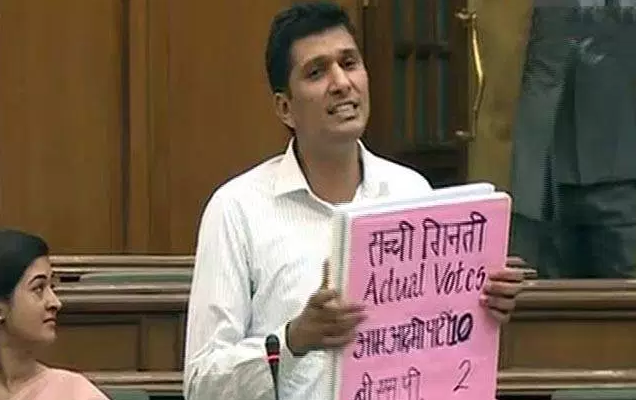 Saurabh Bhardwaj during the demonstration on EVM tampering

As per media reports [t]he Delhi Assembly witnessed dramatic scenes as soon as the special session began. The BJP lawmakers demanded the Speaker to allow discussion on corruption charges levelled by sacked minister Kapil Mishra on chief minister Arvind Kejriwal and health minister Satyendra Jain. However, the Speaker turned downed the repeated appeals and asked BJP members to maintain decorum in the House.

“The Speaker then called in marshals to throw out BJP MLA Vijender Gupta for creating ruckus. He was suspended from the Assembly for a day. Vijender Gupta then sat on a dharna outside the Delhi Assembly in protest against his eviction”, notes The Wire.