Chandigarh: In an attempt to trigger party’s campaigning in Punjab the Aam Aadmi Party is set to launch its initiative of “Punjab Dialogue” tomorrow. Party’s election manifesto preparation exercise will start from Mohali. A press release by the Aam Aadmi Party states that the dialogue would be held with various segments of the society namely Youth, Farmers, Women, Labourers, Traders, Industrialists, Ex – Servicemen, NRI‘s, Government Employees and Professionals. Notably AAP had held similar “dialogue” in Delhi Assembly Polls.

Some of the issues to be discussed are Farmer Suicide , Drugs , Unemployment , Corruption , Law and Order , Health and Education , Mafia (Transport , Liquor , Land , Sand , and Cable), Crime against Women , Atrocities against Dalits, Housing and many more. 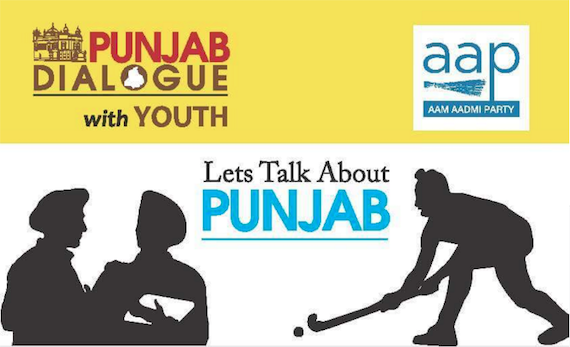 The first segment to be covered under ‘Punjab Dialogue’ will be Youth and the youth manifesto will be launched in June. The first meeting with the youth will be held on Saturday at Landran near SAS Nagar. Nine other meetings with the youth will also be held in the various parts of Punjab on the same pattern.

The President, Youth Wing Punjab, Harjot Bains said “The major portion of the population in Punjab is Youth and it is very important to know what are the problems they facing today. We don’t just want to tell them our plans about the youth but will ask them what they expect us to do for the youth”

Along with Ashish Khetan, Senior Leader, AAP, renowned Journalist, Kanwar Sandhu half a dozen other members will work in his team to accomplish the task. The other members of the committee are namely Chander Suta Dogra, Gurinder Singh Birring, Gagandeep Singh Chadha , Raghu Mahajan, Mohammad Ovais and Dr.Sarika Verma.