New Delhi: The Delhi Sikh Gurdwara Management Committee (DSGMC) seems to be focussing more against the Arvind Kejriwal led Aam Aadmi Party these days than on anything else. In a recent press release the DSGMC alleged that the Aam Admi Party (AAP) was a B-team of Congress party.

DSGMC spokesman Parminder Pal Singh said that a photograph of perpetrator of 1984 Sikh genocide Jagdish Tytler who is congress party leader alongwith with AAP convener and Delhi CM Arvind Kejriwal is viral on the social media these days, and both parties are helping each other in achieving their political goals.

According to Parminder Pal Singh Kejriwal met Tytler on 25 December 2015, in a function organized by Mulsim Samaj on the occasion of function to mark id-un-milad and 13 days after that on 8 January 2016 a letter issued by the Home department of Delhi government of having misplaced a file for constitution of SIT to investigate genocide cases is not a coincidence but part of a well thought out plan. 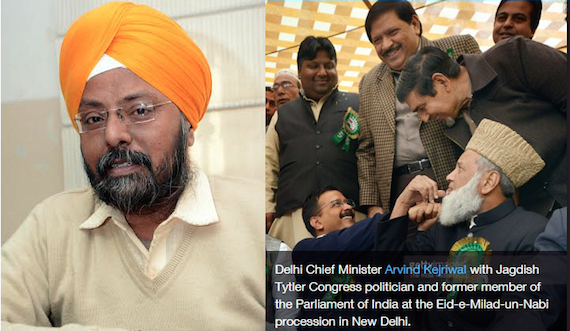 DSGMC has demanded CBI inquiry into the issue of missing of an important file in a press conference on 22 January 2016, said DSGMC spokesman also saying that the Kejrwal and leaders of congress party enjoy warm relations. Parminder Pal Singh said that there is huge difference between what Kejriwal preaches and what he brings into practice and during public rally he makes emotional speeches for fighting for justice to Sikh families victim of 1984 genocide and also mixes up with the perpetrators of the genocide.

He also questioned that why Kejriwal is unable to act against former CM of Delhi Sheila Dixit against whom Kejriwal released a 375 page charge sheet, before Delhi assembly elections, and even after completing one year in the government. “Protecting Sheila Dixit, misplacing file for constituting SIT, maintaining relations with Tytler, meeting Nirankari Baba, naming Sant Jarnail Singh Bhindranwale as a terrorist by AAP leaders and not supporting SIT formed by the government of India proves that Kejriwal is not serious about Sikh issues and the statements given by him from time to time are just an eyewash,” said Parminder Pal Singh, asking Sikhs not to be befooled by Kejriwal and other AAP leaders.