Chandigarh: In a press note released by the Punjab unit of the Aam Adami Party (AAP) on Friday, the incharge of its Human Rights Wing Adv Navkiran Singh alleged that PTC news channel had launched vilification campaign to defame AAP and H S Phoolka.  The channel has made false allegations that H S Phoolka AAP candidate from Mullapur Dakha is having shares in Noida Toll Plaza.

Whilst interacting with the media Navkiran Singh said that  channel was spreading misinformation and indulging into corrupt practices as per provisions of Representation of the People Act 1951.

He further said that a notice against the PTC news channel has been sent to the Election Commission of India in which he stated that the recent incident of January 20, relating to a news in which false information has been spread by the channel by way of interview of Manpreet Singh Ayali who alleged that Harvinder Singh Phoolka is a partner in the business of running the toll tax barrier of Noida along with Jagdish Tytler (an accused in the 1984 Sikh genocide) and Robert Wadra (son in law of Sonia Gandhi) and other congress leaders. 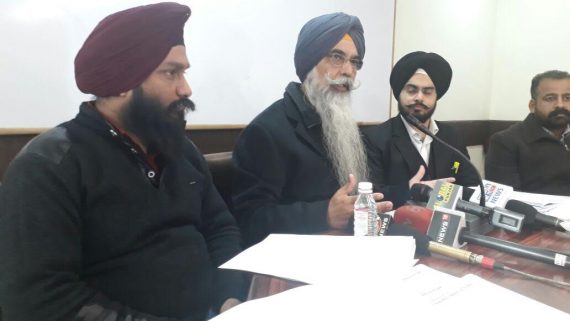 Adv Nakiran Singh while corroborating for H.S Phoolka said that he has no interest in the said business, rather his wife owns shares amounting to Rs. 1 lakh and odd in the Noida Toll Bridge Co. Ltd. which is a public limited company and around 82,000 people own shares of the said company. He further adds that H.S  Phoolka and his wife were not even directors or in any of the managing committee as are being maliciously advertised by the disinformation campaign started by PTC channel.

Navkiran Singh said that H S Phoolka had declared in his Form 26 filed along with his nomination papers that he has movable property in the form of shares worth Rs. 8000 in Reliance Petrochemicals Ltd. and his wife has shares worth Rs. 1,03,400/- in Noida Toll Bridge Co Ltd. (Noida Toll  Plaza).

Furthermore he maintained that PTC channel is misusing its position and committing an offence under section 123(4) of the Representation of People Act 1951 and also violating the fundamental rights of the citizens as provided under Article 19 of the constitution of India and has committed serious offence and needs to be ordered to be off air till the election process is over in Punjab.