Chandigarh: Aam Aadmi Party (AAP) on Thursday (Nov. 03) staged a single-day hunger demonstration to seek justice for the victims of 1984 Sikh genocide. The hunger strike was staged at Sahibzada Ajit Singh Nagar (Mohali)  where the Aam Aadmi Party leadership sought an apology from PPCC president, Capt Amarinder Singh in 15 days failing which he would have face demonstration all across Punjab. 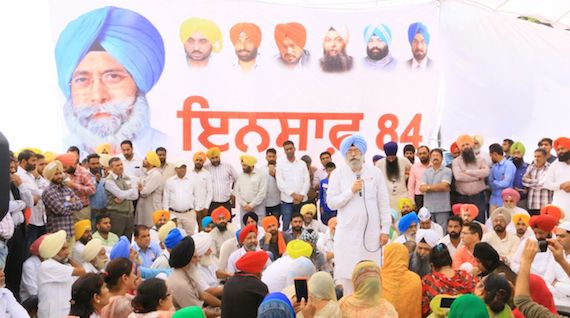 A view of hungerstrike staged by the Aam Aadmi Party

Lawyer turned politician H. S. Phoolka said almost all inquiry commissions appointed to probe the Sikh genocide have clearly mentioned the names of Congress leaders Jagdish Tytler, Kamal Nath and Sajjan Kumar for their role in the massacre of the Sikh masses.

“So who is Capt Amarinder to give a clean chit to all the aforesaid congress leaders?”, asked H. S. Phoolka.

“It appears that Capt Amarinder is trying to protect Tytler, Kamal Nath and Sajjan Kumar out of compulsion especially fearing the backlash from the Sikh masses when the polls are around the corner”, he added.

H. S. Phoolka said Capt Amarinder was either lying or moving in the vehicles of the Sikh murderers when he claimed that on the day of the genocide he was himself moving around in Delhi and visited several Gurudwaras.

“At that time even Gen. Gurbaksh Singh Arora was not able to move around freely as the Congress led murderers of the Sikhs were unleashing wrath on the community. Moreover there is not even a single witness to prove that Capt Amarinder was actually moving in Delhi when the massacre was taking place”, said Phoolka.

Phoolka said Tytler’s name appeared in most of the national news papers on November 5, 1984 as one who led the mobs against the Sikhs. So it was absolutely wrong for Capt Amarinder to say that Tytler’s name came up only during Madan Lal Khurana’s elections in New Delhi.