Jalandhar:  The pro-freedom group of the Sikhs here today while re-asserting that freedom is inalienable right of every individual, the Dal Khalsa has accused Indian leadership for turning blind eye on all written and verbal promises they made during partition with Sikhs while luring them to join the Indian Union. 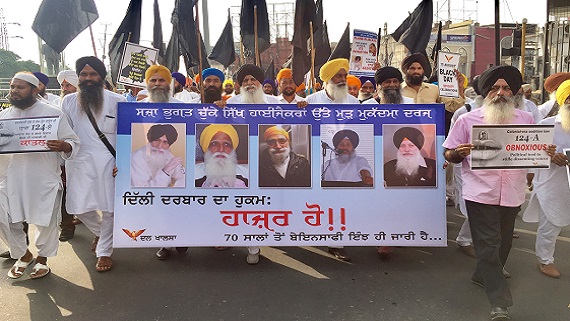 Another view of the march lead by Dal Khalsa leaders.

When UK allowed referendum in Scotland and Canada in Quebec twice, the New Delhi must explain why it was running away to allow the same in Kashmir and Punjab. The resolution to this effect was passed in a conference organized by the pro-freedom group Dal Khalsa here on the eve of India’s 70th I-day.

It further reads : Conscious of the prevailing world order, Dal Khalsa believes that the people of Punjab and Kashmir be allowed to express their free will through exercising the right to self-determination under the aegis of the United Nations.

The organization gave the call for observing Aug 15 as black day.

The gathering at Gurdwara Guru Nanak Mission took serious note of misuse of archaic sedition laws, denial of the right to self determination to ethnic minorities, lynching of Dalits and Muslims by Gau Rakshaks (cow-vigilantes) and imposing pseudo-nationalism on minorities.

Taking a dig at the Sangh Parivar (RSS & its affiliates), the speakers were of the view that Sanghis on the pretext of protecting the animal were using it as an electoral milch cow. Even the Congress is soft-peddling Hindutva. They asked why cow slaughter ban in India and why not a man slaughter ban referring to slaughtering of Dalits, Sikhs, Christians and Muslims by frenzied communal mobs with the logistics support from mainstream parties and the establishment in different parts at different times.

We continue to raise the issue of self-determination despite a conspiracy of silence in the Indian sub-continent, said party spokesperson Kanwar Pal Singh. Whatever may the present posture of the Sikhs and that of their political leadership in Punjab, the undercurrent of dissatisfaction and dismay at the treatment of the Sikhs in India is evident. 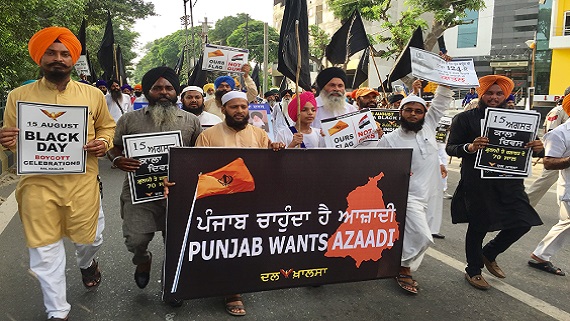 Dal Khalsa activists during a march against Indian Independence Day.

Rejecting the forceful imposition of ‘Jana Gan Man’ anthem  by courts and executive on people under the garb of Indian nationalism (Hindutva), Party leader H S Dhami was categorical that these verses do not represent the independent stature of the Sikhs. He condemned the Indian PM Modi dispensation for targeting Kashmiri nationalist leader S A Geelani. “His family members and party colleagues are being hounded up to break his resolve, which till date is unshakeable”.

The speakers were furious against the Indian state for putting up their five men on retrial under sedition offences in 36 years old hijacking case. The large size poster having photographs of five was put-up in the hall on which it was written- for Sikhs, as always, justice is blind in India. Drawing comparison between two plane hijacking incidents one by Pandey brothers in 1975 and another by Dal Khalsa men, the organizers hits out at India’s double standards by explaining how the act to seek the release of Hindu fascist leader (Indira Gandhi) is perceived as patriotism while the same act did for release of Sikh  leader ( Sant Bhindrawale) is perceived as sedition.

On sedition laws, the speakers termed it anachronistic law. Describing it as “highly objectionable and obnoxious, the renowned lawyer from Punjab and Haryana High Court  R S Bains said it’s a tool in the hands of authorities for harassment and to stifle dissenting voices.  The resolution adopted in the gathering stated that it’s a matter of shame that India failed to scrap the colonial-era law in the first few years after Independence. Britain and many other countries have abolished their sedition laws and it’s time India should join their ranks.

Hundreds of young activists marched on the streets of the city to register their protest against what they call 70 years of political subjugation, injustices and discrimination. They raised spirited slogans in favour of Sovereign Punjab. Protesters carried black flags, banners and placards to draw the attention of the passer-by.