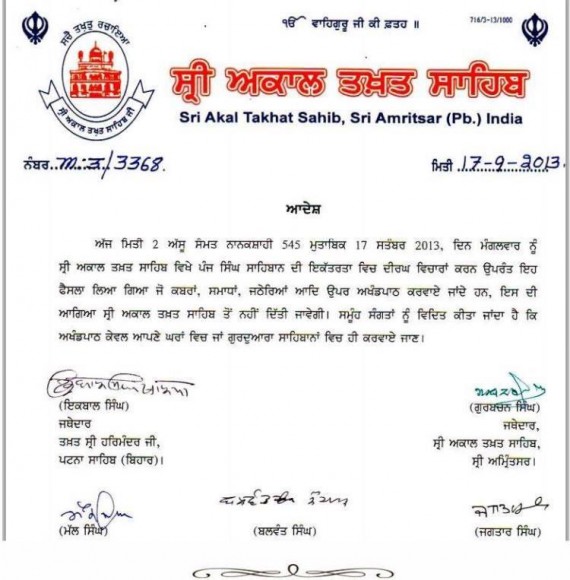 It is notable an edict in this regard was issued by Akal Takht Sahib on September 17, 2013. Giani Gurbachan Singh’s recent statement is considered to be made in the backdrop of controversy over beating up of some granthis at Pamman village in Kapurthala district. These granthis were beaten up by members of Sri Guru Granth Sahib Satikar Committee for deliberately violating the edict of Akal Takht Sahib by facilitating an Akhand Path Sahib at a ‘prohibited place’ near Lohian in Kapurthala district.

Giani Gurbachan Singh, however, did not extend any support to the members of Sri Guru Granth Sahib Satikar Committee, who are facing police case over the beating incident.

Despite admitting that SGPC member Shingara Singh was involved in violating the Sikh Maryada by facilitating Akhand Path Sahib on a prohibited place at Lohian, Giani Gurbachan Singh did not disclose that if any action would be taken against him.