Chandigarh: Former judge and the chairman of the one-man commission constituted by then SAD (Badal)-BJP government in Punjab, Justice (Retd.) Zora Singh has accused Amarinder Singh led Punjab government of protecting the culprits of Beadbi incidents at Bargari; as well as cops who killed two Sikhs at Behbal Kalan.

Justice (Retd.) Zora Singh held a press conference in Chandigarh today (Jan. 9). He said that it was more shocking than surprising that the commission constituted by the government to bring those behind the desecration of Sri Guru Granth Sahib at Bargari and firing incident at Behbal Kalan, failed to make the report of the commission, citing any plausible reasons.

Zora Singh, who had joined the Aam Aadmi Party recently, maintained that like the erstwhile SAD (Badal)-BJP government, Punjab chief minister Amarinder Singh, who had publicly taken a solemn vow invoking ‘Sri Gutka Sahib’ to bring those responsible for the desecration of Sri Guru Granth Sahib and firing, had failed to act swiftly to nail them and bring them to justice, even after a lapse of 665 days of being in power since the announcement was made. 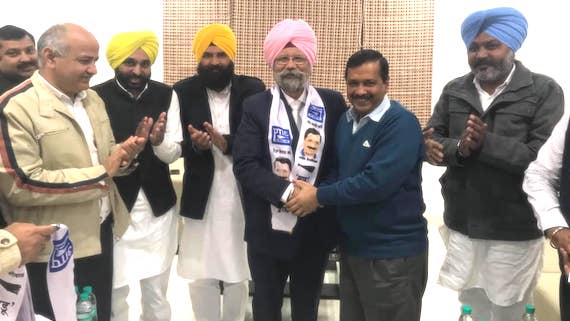 It is notable that after assuming the office of Punjab CM in 2017 Amarinder Singh had scrapped Justice (Retd.) Zora Singh Commission’s report after terming the report as inconclusive.

Addressing media persons today Justice (Retd.) Zora Singh said that he had taken the challenging task of a high profile case at a very crucial juncture and asserted that he had performed his duties with utmost uprightness, commitment and impartiality. He further added that he had handed over the report to the government for further action. “Had the government in the saddle a little sensitized and serious about the facts and findings of the report submitted by the commission, those responsible for the sacrilegious acts would have been behind the bars.

AAP leader alleged that Amarinder Singh was responsible for offering a protective cover to the culprit despite the fact he had taken a solemn vow of Gutka Sahib. He added that Amarinder Singh had no moral right to be in the august chair and said that he should tender his resignation and seek apology from Sri Akal Takht Sahib and the entire Sikh community.

Justice Zora Singh said that on the basis of the evidences collected through investigation of persons who deposed before the commission, six of them were suspected to be involved in the crime, were identified as Rajwinder Singh, Subedar Gurjant Singh, Hardev Singh, Gora Singh, besides a tailor master. He alleged that the names of the suspects were already in the police domain but they did not seem to be in a hurry to investigate the case, he further said. These startling revelations came to light during investigations by the commission. The report of the findings submitted to the government by the commission had found them guilty of desecration of Sri Guru Granth Sahib. He said the Parkash Singh Badal government in cahoots with the police extended protection to them.

He said that it what more painful was that Amarinder Singh like his predecessors, too, did not take the commission report seriously and delayed the process to protect and save the guilty from the wheels of justice. “Being an upright Judge and astute ‘guru ka Sikh’ I feel deeply hurt at the turn of events as to how and why no action was initiated against the culprits by those in power”, he said in a statement.

Jutice Zora Singh further added that during the investigations, it came to his notice that the sketches of the suspected Granthis and other sewadar of the gurudwara, were not released to the media for reasons better known to them. This reveals beyond doubt that the Amarinder Singh government was willfully trying to delay and derail the process of justice to bring the culprits to book, he said. He said the government cannot absolve itself from obstructing the fair play in securing justice those at the helms had assured the people of.

Justice (Retd.) Zora Singh further said that the investigating officers in the case, including a senior superintendent of police (SSP) and deputy superintendent of police (DSP) rank officers who deported before the commission admitted before the commission that the investigations into the Bargari and Bavel Kalan cases were not done as per the merit of the incidents.