Ahemdabad: As per the media reports Bhartiya Janata Party (BJP) chief Amit Shah here on Monday while deposing as witness in favour of Maya Kodnani who is an accuse in Naroda Gam killing case told the court that he had seen former Gujarat minister Maya Kodnani in the state assembly and later at a government hospital the day deadly anti-Muslim violence broke out in parts of the city in February 2002. 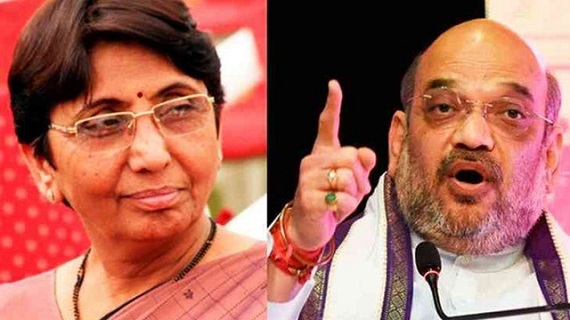 Deposing as a defence witness for Kodnani, who is accused of inciting a mob that killed 11 people in the city’s Naroda Gam area, Shah testified that he saw her in the assembly building in Gandhinagar between 8.30–8.40 am on February 28, 2002.

BJP chief reportedly said that he saw her again later the same morning at the civil hospital in Sola, Ahmedabad. “I reached there between 9.30 and 9.45 am.”

“There was chaos. There were many leaders present. I tried to go inside the post-mortem room but I was not allowed, I was talking to the relatives of the deceased. I saw… Mayaben there,” he further said to the court.

“I left the hospital between 11.15 and 11.30 am. Shah and Kodnani were escorted out by police together.”

The BJP chief told the court he did not know where Kodnani was between the time he first saw her in the assembly building and again at the hospital, or where she went after being escorted out of the hospital, reads the statement of defence lawyer Amit Patel published in an English vernacular.

The state assembly and the hospital are about 23 km apart. The prosecution accuses Kodnani of leading the rioters at Naroda Gam between 9 am and 10am.

Violence broke out across Gujarat after a bogie of the Sabarmati Express was set on fire at Godhra on February 27, 2002. The blaze killed 59 Hindus, mostly Karsevaks or volunteers returning from Ayodhya, where both Hindu and Muslim groups are locked in a decades-old dispute over a religious site. The train fire sparked three days of reprisal attacks across the state that left about 1,000 people, mostly Muslims, dead. Both leaders had visited the hospital where the bodies of the victims of the train fire had been brought, reads a quote from a report publish in an English vernacular.

Apparently, prosecution lawyer Shamsad Pathan contended that Maya Kodnani’s presence in the assembly and later at the hospital didn’t necessarily absolve her.

“Amit Shah told the court Maya Kodnani was in the assembly in the morning and then was seen leaving the hospital around 11.30am. This proves she was present at Naroda Gam when the violence happened,” Shamsad Pathan reportedly said.

Maya Kodnani, the women and child welfare minister in the then Narendra Modi government in Gujarat, has already been sentenced to life in prison for a separate violence related case in Ahmedabad’s Naroda Patiya area, a verdict she has challenged. She’s been on bail since 2014, media reports said.

Moreover, while cross examining Amit Shah’s claim prosecution lawyer asked as to why he did not depose earlier in the Naroda Patiya riots trial, to which Shah retorted that he wasn’t called to testify.

Furthermore, Defence lawyer Shah said 57 witnesses had deposed for the defence side and no more witness is required to appear in the court. On the other hand For the prosecution, 187 witnesses deposed. Pathan said the final arguments are expected to begin from September 25.

In this respective case it is notable that total judicial machinery of Gujarat state is meticulously manipulated in the favor of the accuse so as to streamline the acquittal of the accuse, so of the sting operation videos pertaining to this case can be streamed at social media websites, reports Hindustan Times (HT).