Chandigarh: Protests against the contentious Citizenship (Amendment) Act, 2019 continued unabated across Assam on Thursday, primarily under the aegis of student bodies AASU and AJYCP, with agitators vowing not to relent till the law is scrapped.

Opposition Congress, which has kickstarted an 800-km ‘padyatra’ from Sadiya in eastern Assam to Dhubri in the western end of the state, reached Demow in Sivasagar district with thousands of participants.

The largest anti-CAA gathering took place at Tangla in Udalguri district under the banner of the All Assam Students’ Union (AASU).

“Narendra Modi, Amit Shah and their puppets Sarbananda (Sonowal) and Himanta (Biswa Sarma) are planning to snatch our food, but we will not tolerate that.

“Assam has to be for Assamese always. A conspiracy is being hatched to finish the identity, language and culture of the Assamese people,” AASU general secretary Lurinjyoti Gogoi said while addressing the huge crowd. 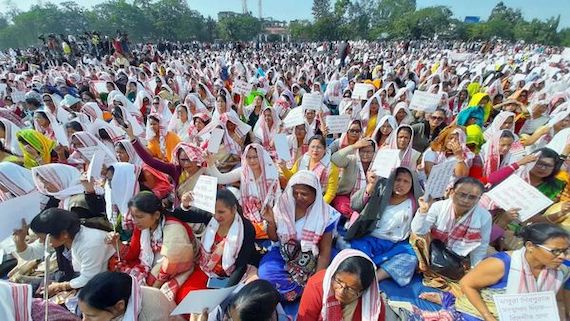 All Assam Students Union (AASU) supporters hold placards as they stage a protest rally against the Citizenship Amendment Act, in Dibrugarh | Source: LiveMint

“If we stay united, those opposing us will be defeated. There may be issues in some places but still, we are together. The government is in its last breath which is why it is trying to lure agitators to end the movement,” Rabha said.

After singing a protest song that he has penned, Rabha said, “The BJP government had promised to give two lakh jobs a year and seal the border with Bangladesh. Both did not materialise. Today, we are on the streets because we do not accept CAA as it will destroy us.”

AASU president Dipanka Kumar Nath said the agitation against the Act will continue in the court and on the streets.

“The government is trying to derail the agitation by luring youths with job offers. They promised to give lakhs of jobs but are offering only 55,000. We will accept them and continue to agitate,” he said.

The Asom Jatiyatabadi Yuva Chhatra Parishad (AJYCP) organised a mammoth rally at Chaliha Nagar playground in Tinsukia, where thousands of protesters vowed to continue the agitation till the Act is repealed.

“People coming out in such huge numbers show that we are not scared. We are firm in our resolve to fight against the CAA. Despite suppression by the government through various means, the crowd is swelling on every passing day,” AJYCP general secretary Palash Changmai said.

Protests were also held in Golaghat, Lakhimpur, Morigaon and Sivasagar.

Agitators also demanded the release of peasant leader Akhil Gogoi, who was arrested during the stir.

The state had witnessed violent agitations after the Citizenship (Amendment) Bill was passed in both Houses of the Parliament.

Five persons were killed and several public properties gutted during the stir.

Curfew was imposed in several cities and towns of the state including Guwahati, Dibrugarh, Tezpur and Dhekiajuli.

However, the curfew was lifted after normalcy returned to these places.