Badal gets “darshan” of Black Flags instead of the Sangat

CM Badal was shown black flags during his first sangat darshan in last three months. The CM is believed to have chosen Khadoor Sahib to resume his sangat darshan programme in view of upcoming bypoll as this seat had fell vacant after resignation of Congress MLA Ramanjit Sikki. 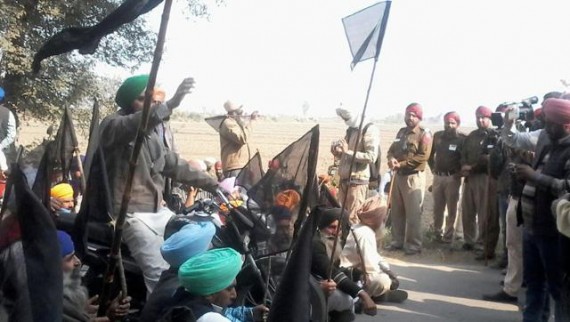 “The chief minister, who started his sangat darshan programmes after a break of almost three months due to the unrest in the state, was left stunned when about 150 farmer activists of the Kissan Sangharsh Committee barged into the venue and held a vociferous protest against him”, notes Hindustan Times (HT).

Showing black flags to the CM, the farmers raised slogans such as ‘Badal-Modi Murdabad’ and criticised the Punjab government for ignoring the issues of the farmers. The farmers also targeted the CM for failing to control incidents of sacrilege in the state, the vernacular notes.

As per information the police immediately came into action, while the chief minister left the village in a hurry.