Sacramento, CA: A White House petition started Saturday asks President Barack Obama to: “Recognize Hunger-Striking U.S. Resident Surat Singh Khalsa & His Peaceful Struggle for Human Rights.” The “We the People” petition has until September 7 to get the 100,000 signatures required to prompt an official response from the president.

The petition, launched by Organization for Minorities of India, reads as follows:

Surat Singh Khalsa, a U.S. resident since 1988 who lives in Lathrop, CA, has been on hunger-strike in Punjab, India since January 16, 2015 to demand release of political prisoners. 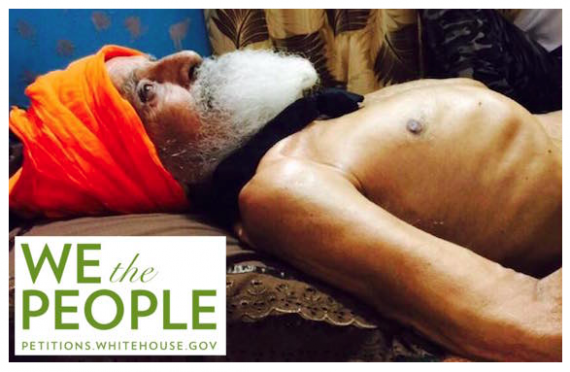 83-year-old Khalsa has been arrested and force-fed three times for exercising his right to peacefully protest. His hunger-strike has inspired thousands around the globe to demonstrate in support. Canadian and British Parliament members and poltical parties have formally recognized him.

Nine CA congressional reps have appealed for Khalsa, telling Secretary Kerry: “We are seriously concerned about the repressive actions that have been taken against him for continuing to peacefully exercise his right to free speech.”

Please take a moment to recognize the world’s oldest hunger-striker, a resident of California.
The online petition system hosted by whitehouse.gov allows Americans an open door to appeal to the country’s chief executive by obligating him to formally respond to any issue that gathers a minimum of 100,000 signatures in one month. As of early Saturday morning, 121 supporters of Surat Singh Khalsa have signed the petition, which runs until September 7.