Ludhiana: Bandi Singh Riahi Sangharsh Committee has said that the health condition of fasting Sikh activist Bapu Surat Singh Khalsa has turned critical. He had started his hunger strike on 16 January demanding permanent release of certain Sikh political prisoners who have completed minimum mandatory terms of their sentences and are eligible to avail benefits of premature release.

In wake of Bapu Surat Singh’s family’s refusal to avail medical assistance for him, the police and civil administration of Ludhiana seem to have hardened their stance. Police has blocked all roads leading to village Hasanpur in their bid to prevent supporters of Bapu Surat Singh from gathering at his house.

There are reports that the police may attempt to forcefully remove Bapu Surat Singh from his house and he may be hospitalized for medical assistance. 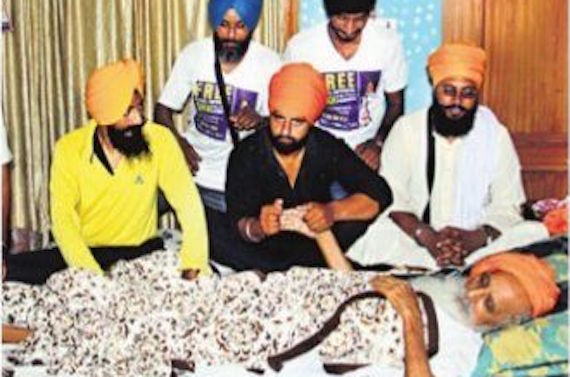 “Punjab government is trying to snub peaceful struggle for permanent release of Sikh political prisoners. Police and civil administration of Ludhiana are hell bent to forcefully hospitalized Bapu Surat Singh. But the family members and the Sangharsh Committee have resolved to oppose any such move in a peaceful manner”, Sangharsh Committee leaders added.

Sources said that Sangharsh Committee leaders held a meeting with civil and police administration of Ludhaina last evening but nothing conclusive came out of this meeting. Administration raised its concerned with the Sangharsh Committee members that some activists had gathered bottle filled with petrol declaring that they would set themselves on fire in case the police tries to ‘pick up’ Bapu Surat Singh. Officials also expressed their worry about some whatsapp video messages that were believed to have been recorded by some members of a Sikh group at Bapu Surat Singh’s house. They said that these messages were very provocative and could lead to a law and order problem in area.

Sangharsh Committee leaders reportedly told the administration to talk to the government to fulfil the commitments made by CM Badal about the issue of Sikh political prisoners. Committee members said that their struggle is peaceful and they will make sure that no untoward incident takes place.