Bhai Ranjit Singh made fervent appeal to Sikh masses worldover to register their protest and anger against the flawed judgement by burning its copies on 30th. Wherever you live in any part of the world, burn the copy and put it on social media to send the message to the Judge that Sikhs were perturbed over the miscarriage of justice. 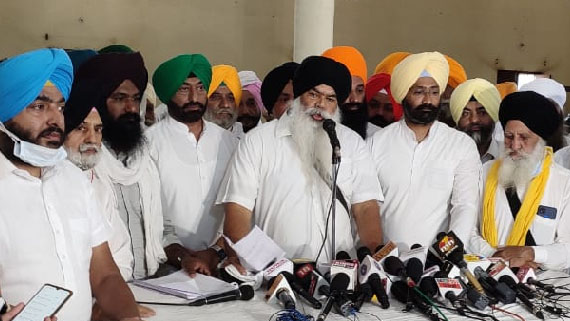 He said theirs organizations will burn the copies at all district headquarters and central event would be held at Kotkapura Chowk, where the incidents occurred six years ago. He appealed to political, social, religious groups of all shades to come together and send stern warning to powers that be. Since 80’s the successive governments in India were meddling in Sikh religious affairs, supporting and patronizing the heretical cults and pseudo-sects that have been challenging the fundamentals of Sikh religion and ethos.

He said the judgement reflects that the Badal family have even managed the judiciary to get the clean chit for them. He said Badal’s have voluntarily playing into the hands of the establishment to enjoy power, perks and privileges.

Justifying the action program, Punjab Ekta party leader Sukhpal Singh Khaira said it’s on the pattern of agitating farmers burning three contentious farm laws in Punjab and elsewhere in India. It’s a democratic form of protest as this judgement has dashed all hopes of justice in aggrieved family and community.

Khaira ,said the HC order has reflected the utter failure of Punjab Govt led by Captain Amarinder Singh and its legal team headed by Advocate General Atul Nanda. On Punjab Govt resolution to constitute new SIT, Khaira said first the CM should own it’s Govt’s failure and sack his so-called inefficiet AG immediately. Without rolling heads or fixing responsibility, any next step will be an eye-wash or time buying tactics.

Raising the pitch against the justice system, Dal Khalsa Vice President Baba Hardeep Singh Mehraj said “Denial of Justice in sacrilege related cases will take the state back to 80’s when the people of Punjab were compelled to do justice on their own”.

Punjab’s former minister Parminder Singh Dhindsa said the CM apart from doing lip service isn’t at all interested in delivering justice to aggrieved family and community. To drive their point Home, he said from Bargarhi to Behbal, from Kotkapura to Maur blast, the Pb Govt has failed to nail and punish the culprits and guilty cops. Even till date, the Punjab Govt hasn’t dared to bring the infamous Sirsa cult head Gurmeet Ram Rahim on warrant for interrogation in sacrilege case.