Amethi (UP):  As per the media reports a crude and a letter supposedly written by the Indian Mujahideen, warning of revenge for the killing of Lashkar-e-Taiba “divisional commander” Abu Dujana, was recovered from the Amritsar-bound Akal Takht Express here today. 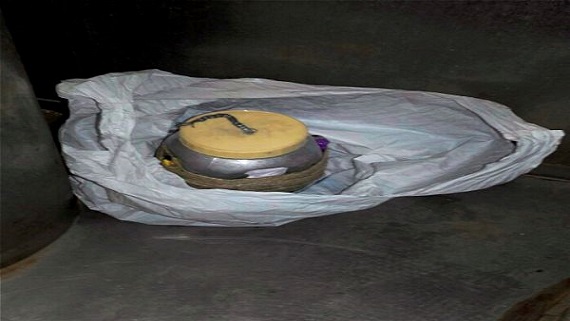 The crude bomb that was recovered along with a letter purportedly by Indian Mujahideen, (IM). Photo by Google.

On being informed, the Government Railway Police stopped the train at Akbarganj railway station, ADG (Railways) BK Maurya was quoted saying by an English tabloid.

“The train was vacated and extensively checked. A bomb wrapped in ‘sutli’ (jute thread) was found in a packet along with two lighters,” ADG Maurya adds.

After the bomb was defused, the train left Akbarganj station for its onward journey, Additional Superintendent of Police (ASP) BC Dubey said while interacting with the media.

The letter recovered along with the bomb is said to be written in Hindi language, the content of the letter purportedly said “Dujana ki shahadat ka badla ab Hindustan ko chukana padega – Indian Mujahideen (India will have to pay for Dujana’s martyrdom),”police sources were quoted saying by The Tribune (TT).