Amritsar: The political situation in Punjab is fluid. Those willing to grab the political power under the authority of the Indian state and weighing their wings. Various Sikh political groups announced to forge a merger during a Samagam held on November 25 at Bargari village and today Shiromani Akali Dal (Badal) rebels from Majha region announced to form a new political party. 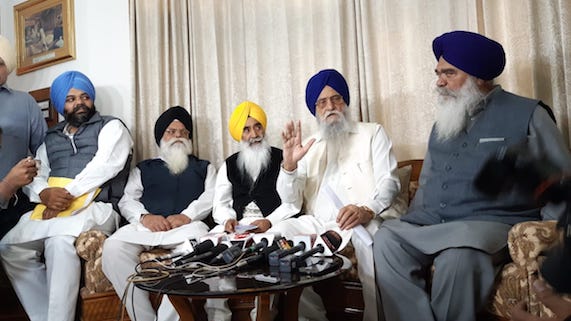 Ranjit Singh Brahampura and others

They claimed that they would “revive the original Shiromani Akali Dal” that was formed in 1920. They accused Sukhbir Singh Badal for turning the party into a ‘family property’ and said that the Badals even changed the basic structure of the constitution of the SAD.

They claimed that they would implement original constitution of the Shiromani Akali Dal in their party.

⊕ A detailed news may be found in Punjabi/Gurmukhi at sikhsiyasat.info.