Ottawa: The National Farmers Union of Canada has expressed solidarity with farmers in India, who continue to protest new agricultural laws formally passed in September.

“This agriculture reform will effectively undermine the guaranteed prices farmers receive through government purchase of staple crops and open them up to exploitation by large corporations. Tens of thousands of Indian farmers are protesting, demanding that these reforms be rescinded or that a new law be introduced to guarantee them a minimum price for their crops”, reads a statement by NFU.

“We in Canada recognize the Indian farmers’ struggle as similar to our own struggle. We support them in their right to protest, and in their call for agriculture policy that supports the millions of smallholder farmers growing food in India,” said NFU President Katie Ward. 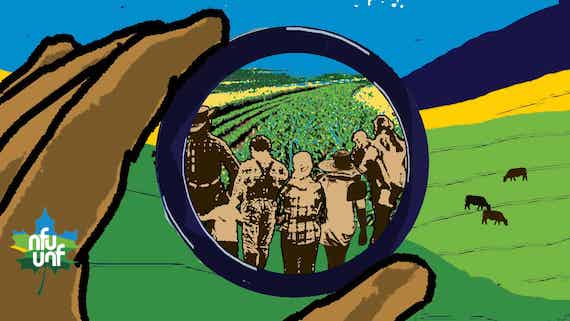 “As shrinking net farm incomes reach a crisis level for farmers around the world and also in Canada, Canadian farmers understand the need for government regulation that works for farmers rather than for those who take profits at the expense of farmers”, read the statement.

“We have experienced the dismantling of institutions that were vital to the bargaining power and, by extension, incomes of Canadian farmers,” said NFU Vice-President Stewart Wells, “For example the loss of the single desk marketing system for hogs in the 1990’s and more recently the destruction of the Canadian Wheat Board, among others.”

“As a result of losing the single-desk marketing system for hogs, thousands of Canadian farmers could no longer raise hogs because they could not access the market without a contract. The intentional shift to corporate hog production has left that sector fully vertically integrated and dominated by only three meat processing corporations. Prices are regularly below the cost of the production. The industry is heavily dependent on government safety nets to ride out the highly volatile market. It is an industry now largely devoid of family farmers. The change in hog farming in Canada was swift and brutal for family farmers raising hogs – a direct result of agriculture policy aimed at assisting corporations instead of farmers”.

“While the circumstances of Indian farmers are vastly different than Canadian farmers in many ways, it is clear that agricultural policies that serve to undercut farmers’ livelihoods to make room for large corporations to profit will have devastating consequences for the millions of smallholder farmers and their families”.

India’s food security is threatened, as the new laws will shift its agricultural economy from “food production” for people to “commodity production” for trade and export. Farmers take on more debt and risk in a system of contract farming, reads the statement.

“The new laws will lift the ban on hoarding food by corporate buyers, which will allow them to capitalize on ups and downs in production by price-gouging consumers during shortages and depressing prices to farmers in times of abundance”.

“Farmers did not ask for this reform, and it is not in their interest. The impacts will be devastating and far-reaching. Canada’s NFU supports Indian farmers in their opposition to these reforms,” Ward stated, “We object to the suppression of democratic protest taking place in India this week. We stand with Indian farmers, and their right to protect their livelihoods by protesting the imposition of these unjust laws.”