In a historic push to protest these laws, hundreds of thousands of Indian farmers and their global allies are marching against this government-backed, corporate takeover of agriculture in India.

The ongoing neoliberal agenda of the corporate elite is stripping away the rights of working people globally, but nowhere is the fight back more obvious than in India right now, and the world is watching.

The Canadian Union of Postal Workers (CUPW) joins the ranks of other labour allies around the world to support Indian farmers in their bid to preserve their working practices and their livelihoods. 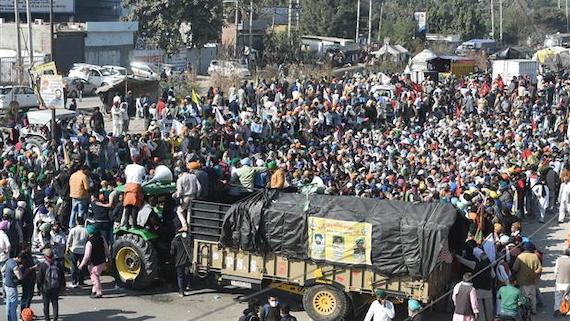 Allied groups have taken their message to the streets across Canada, the US and the EU. Demonstrations in Toronto, Ottawa and Regina, among others, drew attention to the issue, last Sunday, December 6.

CUPW was there to support this important struggle for these workers’ rights.

This is serious because, in essence, India is dismantling market regulation that guarantees wheat and rice prices, and repeals laws that make government purchases mandatory. We must remember that farmers feed the world. As one protester said: “Our farmers are the backbone of our nation”.

CUPW recognizes that society is organized to maintain and perpetuate the inequality of certain groups of people.

Our National Policies are clear on this issue:

Let us stand in solidarity with Indian farmers and fight corporate interests at home and abroad. A corporate takeover of agriculture is designed to strip farmers of their livelihoods, causing massive inequality. This globalized anti-worker agenda must be dismantled.