Caste system is one of the world’s longest surviving social stratification. It is based on a simple one line ideology that “All men are born unequal”. This system is embedded in the Indian culture from the last 2500 years. The most important character of the caste system is endogamy and occupation restriction. These characteristics had also played a big role in maintaining the patriarchal structure and in propagating practices like Sati and child marriage. When we try to trace it back in history we find its origin in Varna system in which society was divided in four parts/Varnas. 1)Brahman – priestly class 2)Kaishtry – military class 3)Vaishya – merchant class 4)Shudra – menial class. These four Varans together constitute the caste Hindus, there is still one more group which is even lower than the shudras, they are known as Untouchables or Avarna Hindus. Later we see a change of Varan system into caste system. Just like Varan system, here upper caste is pure while lower caste is polluted. The way in which the Shudras and untouchables should be treated is clearly written in the religious scriptures like ‘Shudra does not deserve respect, does not need education, cannot possess property, if any upper caste kills a Shudra he need not give any compensation’. It is worth mentioning that most of the labour process which has been essential for sustaining life was done by Shudras only. So it would not be wrong to say that the upper caste/Varans cannot exist without the lower caste. A similar phenomenon can be seen even in the present society where the class involved in the production process is always at the receiving end. Hence we are able to see the amalgamation of caste and class in the present society. 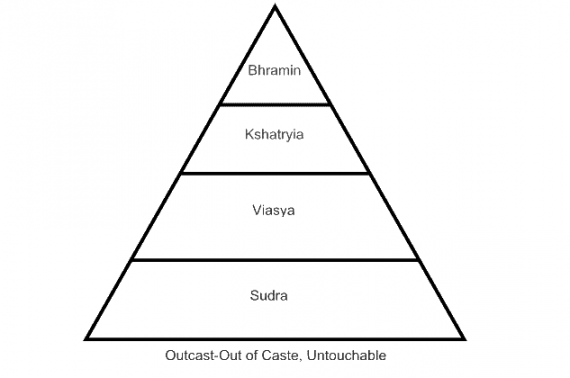 During the period when caste system was very dominant in the society, Guru Nanak came as a revolutionary prophet and he not only stood with the lower caste but also uplifted them. In his own words he said ”Nanak seeks the company of the lowest of the low class, the very lowest of the low, he doesn’t seek the company of the great. In the place where the lowly are cared for – there the blessings of the GOD rains down”. This can be witnessed from his life by the fact that Bhai Mardana ji who was his lifelong companion belonged to a so called lower caste and also from the incidence in which he chose to eat with Bhai Laalo, an honest man, but a so called lower caste but refused to eat with Malik Bhago, a corrupt, who belonged to a so called upper caste. To spread this message Guru Sahib established various practices like sitting together irrespective of any discrimination in one Pangat(line) to have Langar(meal), to take bath in same Sarovar (pond), to drink from the same Bouli(well) etc. Guru sahib had made every sikh to practice the job of all the four varnas during there life . Later Guru Arjan Dev ji included the hymns of the Bhagats who belonged to the so called lower caste and was not accepted by upper caste priests. The last blow to caste system was made by Guru Gobind Singh when he established the Khalsa Panth and declared that the members of the Panth will have no caste. By this act he not only emancipated the oppressed people but also taught them to fight for their own rights.

With passage of time some opportunist also became the part of the Khalsa Panth which led to the adulteration in its principles by brahmanical practices. The seeds of caste system sown by these people have grown into trees and the shades of these trees had eclipsed the personalities like the warriors of Gadar Lehar, Gaini Ditt Singh and Prof. Gurmukh Singh. With the passage of time the ill practices associated with caste was given the name of customs and was normalised in the society. Even the religious and political institutions of Sikhs were not able to remain free from these corrupt practices. In some villages we can even see different Gurudwaras for different caste and even different Langar(meal). This had went so far that recently we had seen social boycott of dalits by the Jatts in rural area of Punjab, sexual harassment of dalit females by upper caste people and many such unjust practices have become normal. Today music and art is been used to propagate this caste prejudice, even in educational campus such songs are welcomed by students whose content is highly castist.

The institution of caste system hinders the development of the society. The responsibility to eradicate these practices comes on the shoulders of the youth and specially upon the educated youth present in the colleges and universities. They have to fight caste system at every step in life be it marriage, socialisation etc.

To spread the message of Guru Sahib, Sikhs have to take the initiative to eradicate these evil-practices from their daily lives to uphold the concept that “All humans are equal”.