Comrade Balwinder Singh Bhikhiwind booked for rape; He was ‘honored’ by Indian President for role against Sikh movement

Tarn Taran, Punjab (September 8, 2014): According to media reports “Balwinder Singh Bhikhiwind, who was presented a gallantry award by the Indian President, has been booked on the charge of rape”. 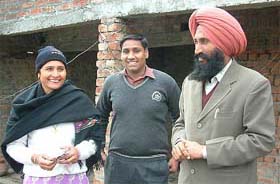 The police said a case under Section 376 of the IPC had been registered against Balwinder and the investigation was on.

Balwinder, popularly known as Comrade Balwinder Singh, was an activist of the CPM for a long time but left the party and joined the Congress some time ago under the leadership of Harminder Singh Gill.

Balwinder award by the Indian state for allying with the state forces against Sikh struggle for freedom of 1980-90s. He was reportedly very close to CPM leader Harkrishan Singh Surjit.

The state had provided light machine guns, carbines, AK-47 and even wireless sets to Punjab comrades who had allied with the state forces against the Sikh fighters and their supporters.

Amrik Kaur, a resident of Amarkot, who was also awarded Shaurya Chakra admitted this fact (as reported in The Tribune, February 09, 2005) saying that: ” … At one time, the police had given us light machine guns, carbines, AK-47 and even wireless sets. […]’.

Update: On 18.1.2019 the court of Judicial Magistrate, 1st Class, accepted the police cancellation report in this case after the complainant suffered statement that she had no objection if the same may be accepted by the court. (Updated on October 1, 2019 at 21:19 hrs Amritsar Time)