New Delhi/ Chandigarh: A human rights group named Citizens Against Hate has released a report titled “Countering Silence” on extra-judicial executions in Uttar-Pradesh and Haryana states. The report that was released on May 8, 2018 is a documentation of 16 incidents of extrajudicial killing in UP and 12 cases of Mewat between 2017-18. Based on the narrations of the family and analyses of the legal documents available, the report concludes with concern that these alleged ‘encounter killings’ are in fact pre-meditated extra-judicial executions.

The very source of the more than 50 encounter killings lies at the ‘crime control’ movement that was initiated by UP Chief Minister, Yogi Adityanath, himse. The CM had stated that ‘jin logon ki bandook ki nok pe vishwas hai, unhe bandook ki hi bhasha mein jawab dena chahiye‘ (those who believe in gun, will be answered through guns). 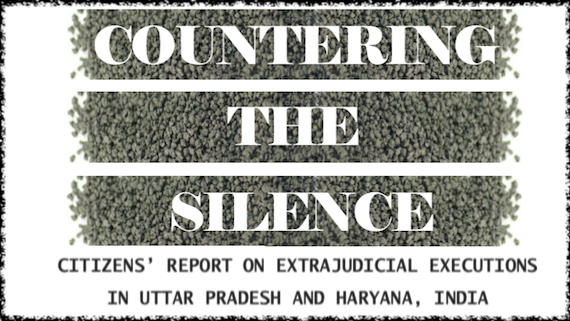 The report released by Citizens Against Hate takes a detailed look at the legalities involved, the investigation and the forensics, concludes that the idea of ‘crime control’ here is clearly an eyewash. Almost all the victims of these killings belong to vulnerable social groups – muslims, dalits and bahujans, and come from low-economic households. All the families, without fail, state that the victims were abducted by the police or entrapped through their informer networks. Bodies of all victims showed visible signs of torture along with close range bullet injuries above the waist- a fact that is corroborated by the post mortem reports accessed by the team.

The report reveals that in all cases, FIR have been filed against the very victims, instead of the erring police officers as mandated by the supreme court. FIR accessed by the team showed an identical template of sequence of events leading to the encounter- raising questions on the credibility. In every case, one person is killed while another person always manages to escape.This is remarkable considering the victim and alleged “criminals” are surrounded and trapped in a planned encounter, with the police far out numbering the criminals. The police have not tried to record the statement of the victim families in a single case. On the other hand, families and local activists are being regularly harassed, their houses ‘raided’ and vandalised at odd hours, and false cases being filed on the family members- all in a systematic attempt to intimidate and prevent victim families from challenging the police version and seeking justice.

The cases in Mewat region between the years 2010 and 2017 follow a similar pattern.While the police in recent cases have been trying to ‘legitimise’ their ‘encounters’ by using the propaganda of Cow Protection Acts, older cases of extrajudicial killings by Mathura police specially reveal a brutal dark history. The report finds that police did not allow the families to take back the bodies of their kin and they were forced to bury the bodies in the heavy and intimidating presence of police. Families were given no access to basic documents like FIRs and post-mortem reports and were threatened openly to not take any action.

The report presents a case for a range of amendments required in the legislation including Section 46 (2) of Criminal Procedure Code (CrPC); exception 3 of Section 300 of IPC; and section 197 of CrPC; along with revision in Supreme Court guidelines of PUCL Vs. State of Maharashtra to to bring out specific and clear directions for recording of statements of family (and not just the “witnesses”); immediate access of the family members to FIR and post-mortem report; recording FIRs u/s IPC 302 – not leaving it up to the discretion of police to decide what kind of an FIR would be registered; and strengthening the NHRC to make it play a more proactive role in protecting human rights of victims and their families.