Chandigarh: With only few hours remaining the counting for the vote for Punjab state assembly election, 2017 that were contested on over 117 seats shall begin on 11th March by 8 AM in the morning. The counting will take place across  54 centers in 27 locations.

More than 14,000 officials have been deployed at the counting centers, where tight security arrangements have been made to ensure that the exercise is completed peacefully.

The Punjab state Congress party Chief Capt Amarinder Singh is banking on his claim that his party would be wining around 65 seats in the state assembly election, hoping to make a come back as the next Chief minister of the state. 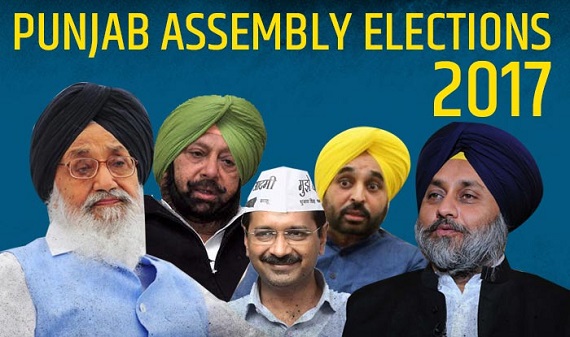 On the other hand the SAD (Badal) along with his alliance partner Bhartiya Janata Party (BJP) would be struggling to retain its position of that of a ruling party. Despite of unfavourable exits poll predictions Punjab Chief Minister Parkash Singh Badal maintained that the alliance partnership will cling a third term by wining around 72 seats. The SAD (Badal) contested 94 seats and its ally BJP 23.

Whereas the new entrant on the political stage of the state Aam Adami Party (AAP) in its debut participation is with full confidence claiming victory over 100 seats in the state assembly and wining with a clear majority. The AAP and its ally Lok Insaf Party, led by the Bains brothers of Ludhiana, are fighting on 112 and 5 seats respectively.

Key constituencies whose results would be keenly watched include the Lambi seat, where the CM is locked in a triangular contest with Amarinder Singh and journalist-turned-politician Jarnail Singh (AAP).

Patiala is another key seat where Amarinder Singh is fighting against SAD candidate and retired army Chief General JJ Singh.