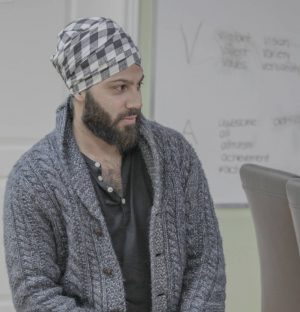 Deep Hundal is the imaginative soul behind ‘Echoes of Mutiny’, a graphic novel project crowdsourcing funds through the Kickstarter website. The truly unique and exquisite imagery of the sample artwork captured my attention, but it’s the sub-heading – “Steam-Punk and British Colonialism meet an unflinching and epic Sikh resistance” – that had me needing to know more about Deep, this project, and steam-punk.

Thanks for speaking to me; I’m going to dive straight in – what is steam punk?

Steampunk is modern technology (computers, robots, airplanes/ships, weapons, cars etc. – powered by steam and set in the 1800’s – early 1900’s. If you’re a Japanese anime fan, then ‘Steamboy’ comes to mind and if you remember, then also ‘Wild Wild West’ with Will Smith and even Hell Boy has some elements of it as well. Steam-Punk is more prevalent than we think.

How long have you been a fan of Steam Punk? Are there many other Sikhs that you know of who are into it?

I’ve never been a diehard fan of Steam Punk. I just thought it was cool whenever I would come across it. And quite frankly, I don’t know a single Sikh that likes steam-punk. Hell, I may be the only one.

Why did you choose to interpret ‘Ghadar di Goonj’ for your first graphic novel? Was that a personal or commercial decision?

I think the last ten years of organizing in the Sikh community and being involved in so many Sikh orientated politics has led me to the eventual realization that we need to reclaim so many of our narratives. The Ghadar movement, and beyond that the Sikh sangarsh against the British Raj, is one of those narratives that has been appropriated and acclaimed by Indian Nationalist/secularists.

About 6-7 years back, Bhai Ajmer Singh had made a trip to my city (Edmonton, Alberta) where he was speaking about a book he had just released, “Ghadari Babe Kaun Sun.” During that talk, he had carefully described how the communist movement (whom we refer to as “Comrades”) has essentially hijacked the Ghadar movement and slowly morphed it into an Indian Nationalist movement with secular and atheistic dispositions. As Ajmer Singh went on to describe the Ghadar movement in their own unmolested words, I remember sitting there and feeling a pit in my stomach. So much of our Sikh history is being torn asunder and we have a responsibility to stop that.

It wasn’t commercial reasons that lead me to write this, it was this deep desire to contribute to the much-needed narratives our Sikh community needs. 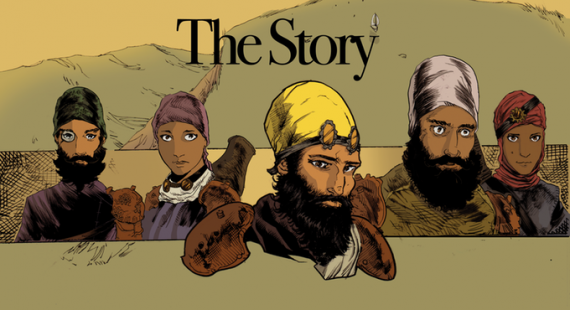 A project like this could be perceived by some as having a limited audience; do you think that’s fair? Irrespectively, what has driven you to invest so much of your own time and money into this project?

Sikhi in its totality has a limited audience too. How many people are willing to get out of their comfort and endorse the use of arms and militancy? Not many. That being said, I’ve never taken myself as someone who appealed to a wider audience, so my default position in life is to expect to be at the margins. lol

The team you’ve gathered together to create ‘Echoes of Mutiny’ are highly talented individuals; are they friends, connections, or did you seek them out professionally?

I went through a pretty lengthy process of trying to bring together a team. I literally spent months on end trying to figure it out all out until I came across Ryan (my penciler) who was then able to find the rest of the team (his friends) and from there we began work. 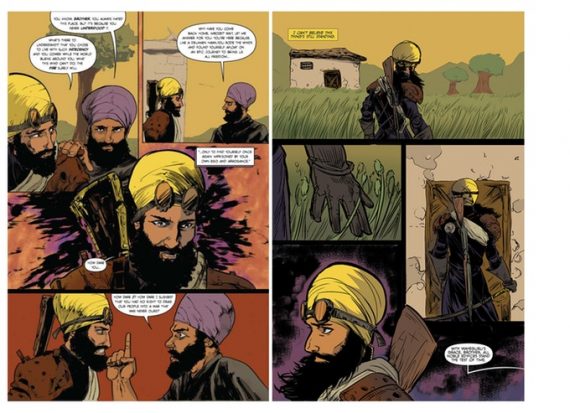 The illustrations and colours look incredible; is that something you conceived as part of the creative direction of this project or did it evolve from the pen of the artists?

It’s all collaborative. There were certain things that were important to me, for example, a softer colour pallet and overall use of colours not conventionally used in Panjab, Sikh creative projects (films, books etc.) But these guys also had strong vision and ideas and you need to let that flow too.

You’re not new to tackling sensitive subject-matter [see ‘The Condemned’]; can we expect the narrative of this graphic novel to be as tempestuous as the historical period it is inspired by?

Without a doubt. This period was complicated (not that any period in our history isn’t) and Sikhs were dealing with multiple threats through numerous ways. I wanted my characters to acknowledge these problems and then try to confront them the best they can. We’re dealing with the outright physical violence of colonialism to its more nuanced machinations: something as small as introducing the vaja (harmonium) to something as insidious as creating their own controllable resistance with upper-caste Brahmin Hindus.

The British Empire, Sikh revolutionaries, Brahmin Hindus – how much of ‘Echoes of Mutiny’ is fiction and how much draws on factual accounts?

I took a lot of what I know and read (and continue to read and understand) and used that as a background and inspiration. I needed creative latitude to tell the story in the way I wanted so I didn’t try to reimagine or re-tell the story of actually ghadari babay/bibis – except for Harnam Singh (the Singh with the steam-powered arm) who is loosely based on the great-grand uncle of one of my good friends who mentioned him to me in conversation and who I thought had a pretty dope story.

But there were a lot of aspects of British rule and Sikh resistance that needed to be incorporated: the creation of the Congress party, the building of the railways (which plays an important part in the story) and the storied and spirited resistance of our Sikh people.

Writing for film and writing for graphic novels are clearly very different. Can you share any of the similarities you’ve found from drafting the story for this project?

Well, it’s pretty funny but when I wrote the first chapter and sent it to Ryan, he told me that it had too much exposition and I didn’t need to do that. I actually felt like an idiot because I put so much heart in trying to explain Punjab to someone who has never been there. Instead, I think I just sent him pictures of Punjab. He suggested I write it like a film script, so that’s what I did.

You’ve suggested on the Kickstarter page that this project is to publish the first edition; what determines the possibility of sequels and future editions?
Frankly speaking: money. I didn’t want to cut corners and I wanted something that would be strikingly beautiful. I eventually realized that this was going to be an expensive endeavour and a part of the reason I took so long in placing it on Kickstarter was apprehension and fear. I wasn’t sure if I would be able to raise the funds and I didn’t want to have to tell this story without this beautiful art and universe. But here I am.

Beyond that and to be franker: a part of the reason I made this was in reaction to already existing creative projects out there. Clearly, they lack imagination and clearly, they’re conceived by individuals who have themselves never grew up watching any damn good animation.

I know steampunk because I watch a ridiculous amount of anime and western animation. Shows like Cowboy Bebop, Avatar the Last Airbender, Full Metal Alchemist, Dragon Ball. Movies like Princess Mononoke, Ghost in the Shell, Metropolis, Akira, everything from Studio Ghibli, Tokyo Godfathers. Honestly, I could go on forever, but you get my point. The reason we don’t see such great Sikh animation is that those at the helm of current ones have such a limited scope of reference which further narrows their imagination.

Our younger generations need to imagine themselves, as Sikhs, in every possible, crazy, fantastical, unrealistic universe possible. Given the almost lack of Sikhs we see in current mainstream narratives, it’s up to us to create those universes.

Is it purely coincidental that the three male Sikh characters resemble the UK-based Sikh rapper (and naujawani collaborator) SINGH MAHOON?! I know you know him, did you get him to model for the art work?

Mahoon is my homie and one of the characters looks very much like him. I won’t say whom. But what I do know is that Mahoon has an amazing voice and if some incredibly rich Sikh decides that they’re going to full fund an animation, then Mahoon will voice that mysterious character.

Thank you very much Deep and best of luck with the project, we look forward to seeing this in print next summer. ‘Echoes of Mutiny’ is being crowd-funded on Kickstarter between now and Monday 17 July, 2017 for the humble total of $15,000 (Canadian dollars). Contributions are only taken once the entire amount has been procured and the crowd-funding period has concluded; pledge your support at: https://www.kickstarter.com/projects/1033862513/echoes-of-mutiny.

Deep Hundal was interviewed by Harwinder Singh Mander from Naujawani.

Associated images to compliment this interview can be found on the Kickstarter project page (see link); credit: ‘Echoes of Mutiny’.