Addressing the press conference party head H S Cheema hoped that the party could bank upon the primary members for fulfilling their’s dream for a `sovereign Punjab’- free from India, while declaring that they would stick to principled and ideological brand of politics and adhere to peaceful and democratic means. 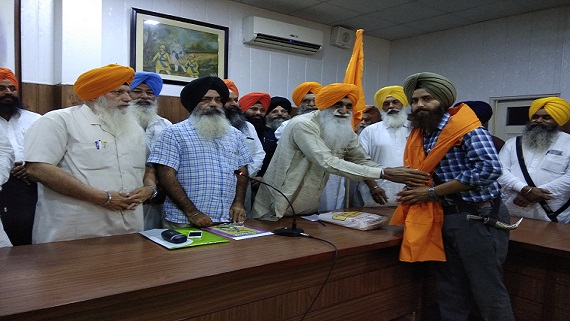 Party re-appointed Gajinder Singh as its patron. He is a founding member of the organization, presently living in exile. Addressing the press conference, H S Cheema said the new set up is a combination of old hands and fresh blood. He said for the first time, party has given the important port folio of Secretary General to youth. He said Paramjit Singh, who belongs to Tanda region of Hoshiarpur  district will hold this post.

Earlier, Paramjit Singh Tanda was heading the youth wing Sikh Youth of Punjab (SYP). He along with Prabhjot Singh resigned from SYP to join Dal Khalsa. Paramjit Singh Mand who did post graduation from GNDU was appointed acting head of the SYP and was assigned the task to resurrect the youth body by Dec end.

As per statement, Baba Hardeep Singh and Amrik Singh Issru has  been appointed vice-president’s, Ranbir Singh has been assigned the job of organizing secretary, while Kanwar Pal Singh will hold the post of secretary political affairs in addition to party’s chief spokesperson.

Baldev Singh Sirsa will hold Kisan (farming) related matters and Jasbir Singh Khandur who are new entrant in the executive has been nominated coordinator.  Udhay Singh from Sirhind will hold the post of Secretary Cultural and sports affairs.

Others who have been included in the executive panel are H S Dhami, Kulbeer Singh Barapind (member SGPC), Surjit Singh Khalistani and Prabhjit Singh Nawanshahr.

Reiterating their goal for sovereign and independent Punjab, Kanwar Pal Singh said the feeling of oneness for this country has been lost. Tens of thousands have been killed or butchered. The Sikhs have realized that the pursuit of justice (referring to Nov 84 genocide and fake encounters post 84) in this country was an illusion as the (Indian) state is complicit in the violence.

The leaders expressed anger and concern over the rise of Hindutva radicalism and build up of climate of fear by government sponsored outfits.  The Dal Khalsa meet discussed the issue of formation of World Sikh Parliament and the proposed unity move with like minded parties in view of the impending election to the general house of the SGPC.

Trying to put away years of tension between different Panthic groups, Dal Khalsa has urged like-minded factions that they should not treat each other as adversaries. Their infighting by default has given room to the Hindutva elements whether they are in BJP, Congress or AAP to establish and expand its rural base in Punjab. Instead Cheema counseled that since all parties drive their strength from Sikh masses the time has come when the different shades of the Panth should work in tandem to achieve Punjab’s independence from India.