Hoshiarpur: Dal Khalsa has dedicated this year’s World Human Rights Day (WHRD) to the rights of farmers and political prisoners from Kashmir to Punjab to central India.

To commemorate the 72nd anniversary of Rights Day, the Dal Khalsa leaders released the poster in this regard during a press conference held here today. They demanded the release of those prisoners, who were framed in false cases due to their political belief and ideology beside those who have completed their jail term, alleging that their detention was illegal. 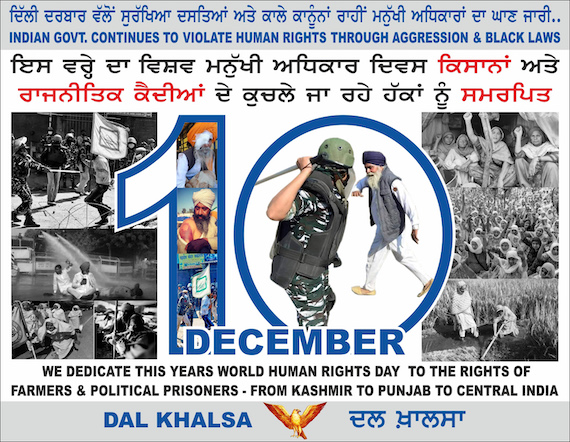 President Harpal Singh Cheema said Indian government continues to violate human rights through aggression and black and draconian laws. He said taking undue advantage of the countrywide lockdown, the present Government targeted all those sections that are politically and ideologically opposed its fascist policies and framed them in fake cases. He referred to the names of the students of JNU and Jamia Millia Islamia who were booked under UAPA in connection with Delhi violence. He said ever since the Modi government 2 has been formed, the rights excesses in Kashmir, Punjab, Delhi and elsewhere has increased manifold. He said the protesters against CAA and NRC, abrogation of Article 370 and recently enacted three contentious farm laws have met with batons and prisons.

The organizations young activists led by Paramjit Singh Tanda were participating in the on-going stir in Delhi and observing the day with protesting farmers. 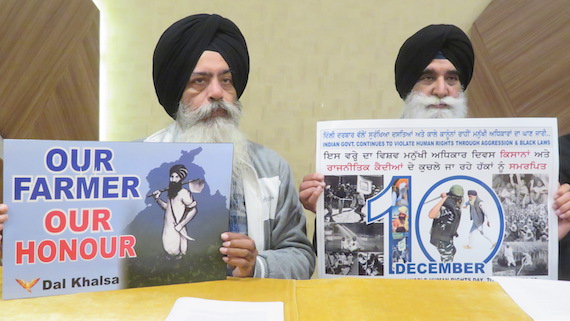 Cheema, who was accompanied by senior leaders H S Dhami and Kanwar Pal Singh, said it seems the ego of Narendra Modi and Amit Shah is coming as a big hurdle in conceding to the farmer’s demand in dropping three farm laws. They urged the farmer organizations spearheading the agitation not to lower the guard.

When reporters asked about an allegations making rounds that Khalistanis have infiltrated in farmers agitation, Harpal Singh Cheema clarified its a sheer propaganda. He said like farmers all other sections of society are participating in the agitation because they are also sons of the soil. They are very much part of our society and are equally concerned and bothered about the future of farming that is being threatened by new laws. He narrated his own example. I too participated and joined the Delhi sit-in.

He said there is a design to propagate their participation to create divisions and segregate Punjab farmers from the rest of countries farmers.

As far as decision making is concerned it solely rests on joint leadership of farmers organizations.

Khalistan and farmers andolan are two separate causes, and people in power and Godi Media was unnecessarily clubbing both, observed Cheema.