Hoshiarpur: Notwithstanding a change of the government in the Punjab, the pro freedom faction of the Sikhs Dal Khalsa held a ‘Khalsa March’ in memory of the Sikh warrior Baba Baghel Singh, revered by the Sikhs for his capture of Delhi and unfurling of the Sikh national flag atop the historic Red 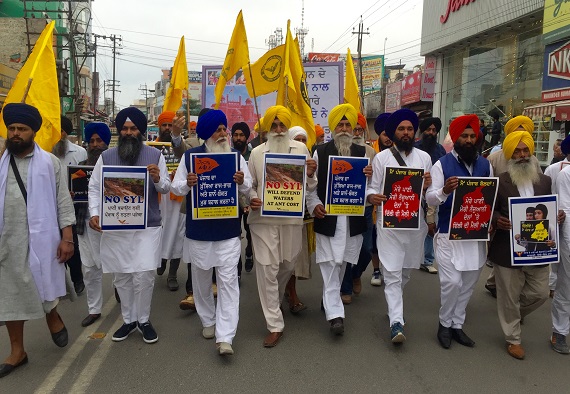 Fort and reiterated their mission for regaining Punjab’s lost glory and self-rule.It was on this day 234 years ago that Baba Baghel Singh unfurled the Nishan Sahib at the Red Fort in Delhi and established the rule of the Sikhs there. Recalling the historic occasion, leaders of the Dal Khalsa extolled the military and political qualities of Baba Baghel Singh.

Hundreds of youth activists associated with Sikh Youth of Punjab’ led by its president Paramjit Singh Tanda came out to the streets of the city carrying Sikh flags and banners to spread their message. The big size hoardings were displayed having photographs of Sikh Generals of yesteryear and recent Sikh struggle.

Confronting the statement of union minister Venkaiah Naidu, wherein he has said that Azadi slogans will invite action under sedition law, the activists raised the slogans of Azaadi and carried placards on which it was written  “Azaadi is our birthright and struggle to attain it is our commitment”.

Party head Harpal Singh Cheema said the ghost of the SYL canal has cropped up again to haunt the people of Punjab. He said the digging of SYL was next to impossible and that the people of Punjab would not allow this to happen. ‘We will defend the rights of the state at any cost, said the head of the pro freedom group. He said they would not allow robbing or taking away the waters forcefully with state’s might. If it will happen we have a right to oppose, protest and dissent.

Delivering the keynote address at a convention held at local gurdwara, he talked of unfinished agenda of Punjab’s Sovereignty to ensure safety and respect for all its citizens irrespective of religion.

Referring to newly-elect CM Captain Amrinder Singh for containing the drug menace within four weeks of his forming the government, Kanwarpal Singh, spokesperson of the party observed that it’s easier said than done. He said a strong political will was needed to break the political-smuggler-police dirty nexus and end the political patronage to the drug peddlers.

Senior leaders H S Dhami  and Satnam Singh Paonta Sahib told the audience to stand united, meet the challenges thrown by external and internal forces inimical to Sikh interests and aspirations and avoid the bickering in the name of maryada as it has potential to divide the Sikhs vertically.