He gave this call while addressing a function in the complex to commemorate martyrdom day of Shaheed Beant Singh.

He said Shaheed Beant Singh, along with Bhai Satwant Singh had executed the then Indian Prime Minister prime minister who had ordered army attack on Darbar Shaib Amritsar and other Sikh Gurdwaras in Punjab and adjoining states in June 1984.

The nephew of Shaheed Satwant Singh was honoured with siropa at the function by Giani Jagtar Singh. The siropa on behalf of the family of Shaheed Beant Singh was received by Dal Khalsa chief spokesman Kanwar Pal Singh as they could not reached on the occasion. 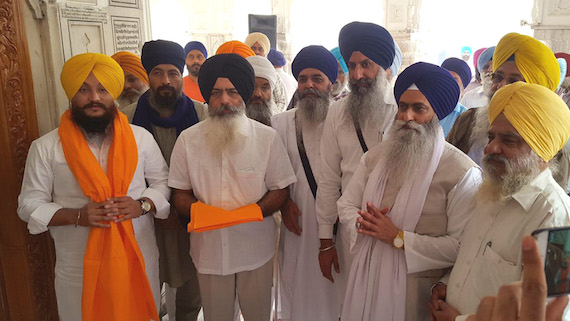 It may be mentioned that the family members of Shaheed Beant Singh organised function today at his native village Maloya on the outskirts of Chandigarh.

The Akal Takht had honoured Shaheed Beant Singh, Shaheed Satwant Singh and Shaheed Kehar Singh as great martyrs and today’s function was organised by the SGPC in the complex in their memory.

Talking to media persons, Dal Khalsa leader Kanwar Pal Singh endorsed the call given by Giani Jagtar Singh and said Sikh groups would abide by it. He said the Panth was proud of these three martyrs who had avenged attack on the Sikh faith in accordance with the historical Sikh tradition.