As per TV channel reports the police today arrested Kanhaiya Kumar, one of the organisers of Tuesday’s event. Krishan Kumar is president of JNU Students’ Union. JNUSU is an elected students body. ABVP was able to secure only one seat (Saurabh Kumar Sharma was elected as Join Secretary) in JNUSU elections.

There are apprehensions that the police may also arrest another student leader Umar Khalid. 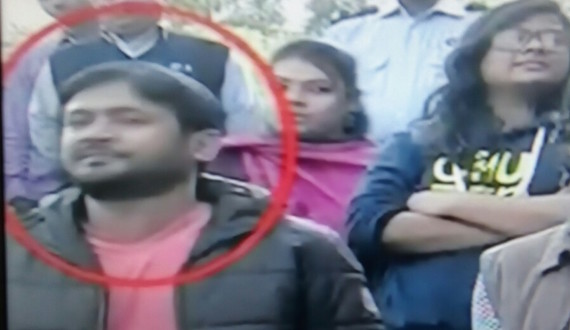 It may be recalled that pro-Hindutva students’ outfit Akhil Bhartiya Vidyarthi Parishad (ABVP) had objected against an event organised by some other students groups of JNU to commemorate the death anniversary Kashmiri national Afzal Guru, who was hanged secretly by Indian state on February 9, 2012. Afzal Guru was convicted by an Indian court on the charges of 2001 attack on Indian parliament. Many intellectuals and activist groups term his hanging as “judicial murder” conducted by the Indian state.

A case under Section 124A (sedition) and 120 (B) (criminal conspiracy) has been registered against unknown persons at Vasant Kunj North police station, confirmed Deputy Commissioner of Police Prem Nath.

India’s Home Minister Rajnath Singh gave a short TV interview in which he said that no slogan against unity and integrity of India will be tolerated.